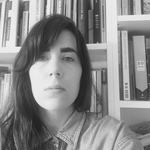 Sarah E. James is a Lecturer in History of Art at University College London. She is author of Common Ground: German Photographic Cultures Across the Iron Curtain (Yale, 2013). Her next book projects are: Paper Revolutions (a book on East German unofficial art practices and their relationship to socialism, utopian thinking and the German and Russian avant-garde) and Photography Against Itself: The Militant & the Mainstream (exploring the 1940s, 50s and 60s work of Henri Cartier-Bresson, Edith Tudor-Hart, Erwin Blumenfeld and William Klein in relation to Leftist politics and popular culture). She has written widely on: photography; photobooks; East German art; the German avant-garde, and contemporary art. She is also an art critic and has contributed regularly to Frieze, Frieze DE, Art Monthly, Photoworks and Art Review. Before joining UCL she was a Lecturer in Art History at the University of Oxford (2009-10), a recipient of an AHRC Early Career Fellow award (2010-2011), and an Alexander von Humboldt Postdoctoral Fellow at the Humboldt-Universität in Berlin (2007-9). She received a B.A. in Social and Political Sciences and the History of Art from the University of Cambridge (2001), and an M.A. (2002) and PhD (2007) in the History of Art from the Courtauld Institute of Art, London