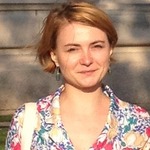 In 2012-2015 Magdalena Moskalewicz was a postdoctoral fellow for the C-MAP research initiative at MoMA, where she conducted research and organized academic programs for the C-MAP Central and Eastern Europe group. She was a founding co-editor of post in 2013, and the editor responsible for Central and Eastern European contents until September 2015.

Awarded a PhD in art history from Adam Mickiewicz University for her research into the Polish neo-avantgarde of the 1960s, Magdalena has published and lectured internationally on Polish abstract painting, assemblage, and conceptual art. Her other research interests include Eastern European art and identity, the art and culture of the Cold War era, exhibition histories, and the methodologies of the discipline of art history. She has also written on more contemporary practices, most recently for Central European Companion to Political Ideas (Central European University Press, in print.) Moskalewicz was a Kosciuszko Foundation research scholar at Barnard College in New York (2010) and a core group participant in the Research and Academic Program “Unfolding Narratives: Art Histories in East-Central Europe After 1989,” organized by the Sterling and Francine Clark Art Institute (Williamstown, MA; 2010-2011). Before joining MoMA and post, Magdalena was the editor-in-chief of Poland’s monthly contemporary art magazine Arteon. Her curatorial projects include the Polish Pavilion at the 56th Venice Biennale (2015), where she presented Halka/Haiti 18°48’05″N 72°23’01″W, and edited a book under the same title. In her scholarly, editorial, and curatorial work, Moskalewicz critically investigates local art histories and representations of national identities in order to reshape and revise dominant historical narratives.

On the note of ephemeral and intriguing invitations

By Magdalena Moskalewicz
Posted on 24 May

Sven’s comment about the poster or invitation that becomes the event itself, instead of announcing one, made me think of another neo-avantgarde artist, the Romanian Andre Cadere, who in 1975 produced a perforated invitation to his show at the gallery Yvon Lambert. The invite could be split in half and Cadere handed one of the halves to random people met in the streets of Paris, in a leaflet-distributing mode, while he traditionally mailed the other half by post to all the respected participants of the Parisian art world. In this way the artist pointed to various channels of art distribution as having (or not) the value-assigning powers. Interestingly, the half intended to be sent by post emphasized the gallery’s name, which was printed as first, in capital letters. The one handed personally by the artist, however, started with his own name - as if to stress the personal aspect of this direct relationship that was created between two strangers at the moment of the exchange. Through this double act Cadere did what he liked best – commented on the institutionalization of the art world. 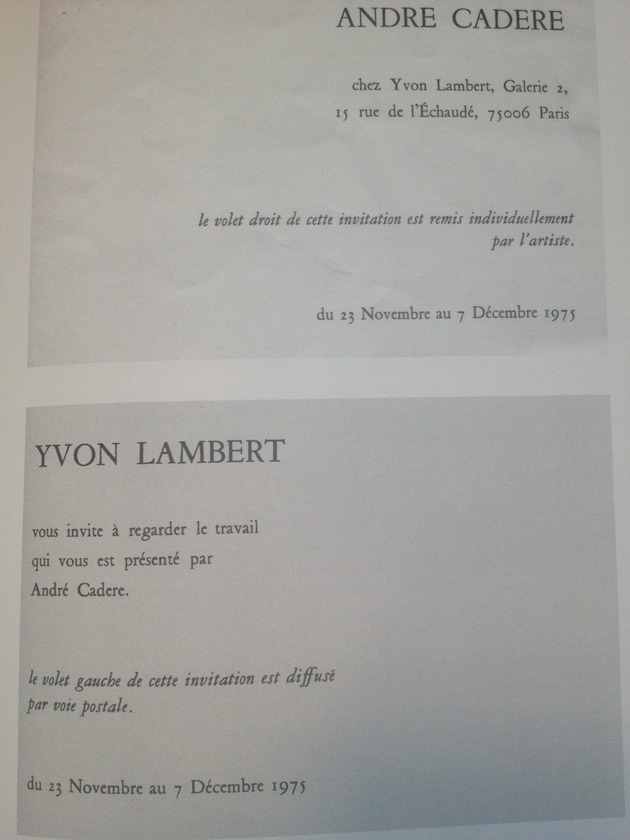 And so - similarly to Gorgona’s “You are invited”, and the aforementioned Tanadori’s poster that became an event - Cadere transformed the invitation into a piece and emphasized the very act of handing/sending the printed invite as meaningful. Indeed, he presented it as the point of departure for the potential production of a variety of meanings, and at least equally important to the very show, which it announced.

Interestingly enough, Andre Cadere himself commented on this institutionalization-through-invitation effect in another work of his, a mailed document in a form of yet another invite. This one is a self-reflexive piece of no actual function; it calls itself an “invitation” but the lack of date or place makes it impossible to see it as such. (And also prevents from situating the piece in any context even today, when it is not clear when he sent it and why). 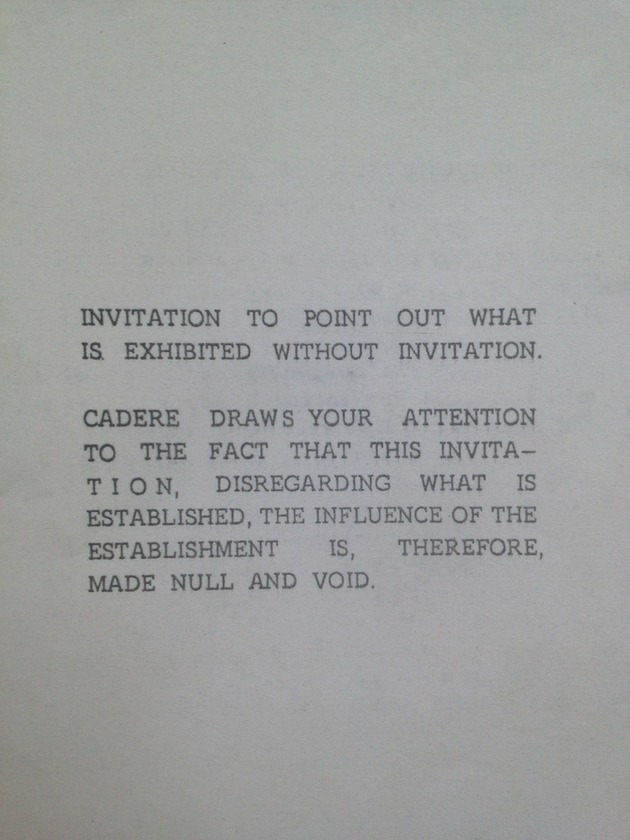 What’s more, the message is not entirely clear (is there a verb missing in the second sentence?). Cadere, most of the time a French-speaker for the sake of his language-based art, wrote this piece in English, possibly for international circulation. This might explain the language slippage. Or was this an intentional step, taken to make the non-inviting invite even more intriguing, “null and void”?

Sven’s comment about the poster or invitation that becomes the event itself, instead of announcing one, made me think of another neo-avantgarde artist, the Romanian Andre Cadere, who in 1975 produced a perforated invitation to his show at the...

Revolution is Rubbish! (The Polish contribution)

By Magdalena Moskalewicz
Posted on 16 Dec

The main message contained in one of the four responses to “Poema Collectivo: Revolution” sent from Poland, and communicated in both Polish and German, reads: “Collective Poem Subject: Revolution = Rubbish!” In addition to rubbish, there is shit in it too. It ends with (in German): “I shit on the revolution!”, to which the Polish counterpart phrase says even more bluntly: “You stupid dicks!!!”. The outrage is explained slightly more politely in the bilingual middle section: “Live at least one year in Poland or the Soviet Union, please, and then we can talk about, and make, the revolution”. 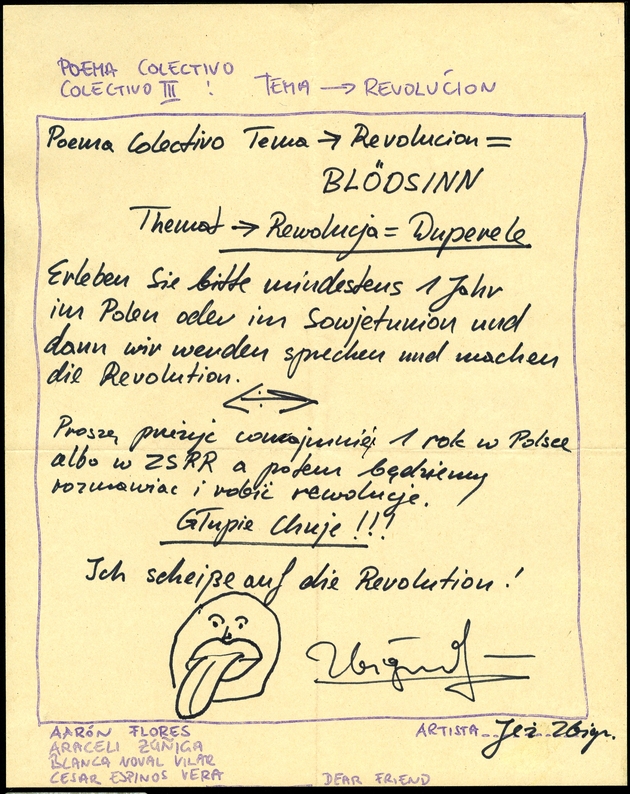 The artist actually uses “please” there, and the formal language in both German and Polish (Erleben Sie bitte / Proszę przeżyć), indicates that his excessive resentment is not a purely spontaneous, emotionally motivated response. In fact, in the part of the world where he was responding from, the term “revolution” was at the time completely appropriated by the communist revolution, and to many did not mean anything else than a hollow ideological cover for the totalitarian measures pursued by the supposedly democratic-socialist government. To a Polish artist active in the early 1980s, who had probably spent most of his adult life in the USSR-dependent People’s Republic of Poland, the very idea of making art on the topic of revolution must have sounded ridiculously outrageous. There, art about revolution denoted the props and decorations produced for all the farcical anniversary galas regularly held at offices and schools, and official state-organized street manifestations, that all citizens were forced to participate in, where the slogans of the communist revolution were continuously repeated, but devoid of meaning. Other than, in fact, being the signifiers of oppression. This was the appropriated and bureaucratized “revolution” that the majority of the Polish art world wanted to keep away from since the break from the socialist realism in the mid-1950s.

It looks to me that to Zbigniew Jeż (I don’t know the artist, and I keep wondering if this can be this person?) some Mexican artists asking him to comment on the topic of revolution through the means of mail art must be either oblivious (“rubbish”) or be the - all too ignorant in their playful artistic practice - “stupid (silly) dicks”, who in fact have no idea of what they’re talking about.

The main message contained in one of the four responses to “Poema Collectivo: Revolution” sent from Poland, and communicated in both Polish and German, reads: “Collective Poem Subject: Revolution = Rubbish!” In addition to rubbish, there is shit...

By Magdalena Moskalewicz
Posted on 20 Jan

Hi Felipe, The Polish label BOŁT RECORDS, New Music From Eastern Europe has been in the past few years consequently publishing remastered versions of many of the sound pieces produced at PRES, together with their contemporary reinterpretations. You can review their CDs and listen to some samples on their website.

Hi Felipe, The Polish label BOŁT RECORDS, New Music From Eastern Europe has been in the past few years consequently publishing remastered versions of many of the sound pieces produced at PRES, together with their contemporary reinterpretations....

By Magdalena Moskalewicz
Posted on 20 Feb

MoMA Library would be a good start: See the list of books here

MoMA Library would be a good start: See the list of books here