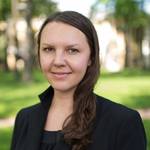 Anna Bitkina is an independent curator, director, and co-founder of The Creative Association of Curators (TOK). In her curatorial practice, she is interested in issues related to the concept of public space in post-Soviet Russia, as well as on perception, understanding and mechanisms of use of public spaces and open areas by residents of post-Soviet cities. In her projects, she explores a changing role of cultural workers and possibilities of creative practices in different social spheres. TOK is curatorial collective based in St Petersburg and founded by Anna Bitkina and Maria Veits in 2010 as a platform for conducting interdisciplinary projects in the fields of contemporary art and design and social sciences. Started as a grass-root initiative, TOK is an example of a new form of self-organised, nomadic, and sustainable art institution that responds to social needs nationally and internationally. Working primarily in public spaces and with state institutions, TOK bases its curatorial methods on the principles of ‘soft power’ and professional dialogue. In their projects, TOK aims to find like-minded people in governmental institutions, establish dialogues with them, and develop conditions for an open discussions, analyses, and criticism of current political system. Through its projects, TOK also develops and demonstrates alternative scenarios of how the system could operate. They apply their practice to the Russian educational system, youth organizations, local governments, media and others.