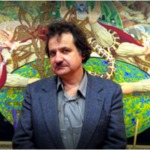 Gustavo Buntinx (1957) is an art historian and theorist, as well as a curator and museum activist. He was born in Buenos Aires, Argentina (1957), but grew up in Lima, Peru, where he is currently based. He graduated magna cum laude from Harvard University (1978), and has taught at the undergraduate art history school of the University of San Marcos (UNMSM, Lima, 1985-1992), as well as the graduate schools of the universities of Buenos Aires (UBA, 1993), Sao Paulo (USP, 1994), México (UNAM, 2006), and San Marcos (2006-2007). His best-known work explores symbolic constructions under complex historical circumstances, as well as the relationships between art and violence, art and politics, art and religion. On these and other subjects he has organized exhibitions and published in a variety of countries. Although his research has been principally involved with modern and contemporary art, he has also dwelled on Colonial and nineteenth or early twentieth-century subjects, particularly on topics related to the representation of the Native American subject.

Buntinx’s writings have been included in compilations by publishers such as Turner; MIT Press; Duke University Press; the Belgian Royal Museum of Fine Arts; the New Museum, and the Bronx Museum of the Arts, at New York; the Antoni Tapies Foundation, at Barcelona; the Museo Extremeño e Iberoamericano de Arte Contemporaneo (MEIAC), at Badajoz; the Institute of International Visual Arts (INIVA), at London. One of his most important books is E.P.S. Huayco, published by the MALI and the CEE on 2005. In 2006 he was the coeditor of the book Museum Frictions: Public Cultures / Global Transformations, published by Duke University Press. He is currently the coeditor (with Víctor Vich) of Partes de guerra, a special collection of case studies on the image of violence in contemporary Peruvian art, which include four books already published and two others in preparation.

Buntinx maintains a permanent museum praxis that dates back to the first half of the 1980s. He directed in Lima the Museo de Arte Italiano (1990), the Museo de Arte e Historia de San Marcos (1992) and the Centro Cultural de San Marcos (2001-2006). He was also the Chief Curator of the I Bienal de Fotografía de Lima (2012), and a member of the steering committees of the Bienal de Trujillo, Perú (1987), and the Bienal Iberoamericana de Lima (2000-2002). Buntinx is also the founder and “chauffeur” (driver, i.e. conductor) of MICROMUSEO (“al fondo hay sitio”) ("there is room at the back") (www.micromuseo.org.pe), an experience of confrontation and recovery of critical art and material culture, articulated in response to the Peruvian museum void. The project has accomplished dozens of exhibitions, publications and critical interventions, and in 2007 had a major show at the Encuentro entre dos Mares, Bienal de Sao Paulo-Valencia, leading to the publication of the book Lo impuro y lo contaminado: pulsiones (neo)barrocas en las rutas de Micromuseo. A much broader version of this show occupied the entire premises of Santiago’s Museo de Arte Contemporáneo at the Chile Triennial (October-December 2009).

Buntinx has also been seriously involved with various initiatives related to the struggle for democracy and civil rights in Peru. In the year 2000 he was one of the founders of the Colectivo Sociedad Civil, a collective responsible for the gestation of Lava la bandera (Wash the Flag) and other civic rituals whose enormous popular appeal played an incisive role in the cultural overthrow of the Alberto Fujimori and Vladimiro Montesinos’s dictatorship.