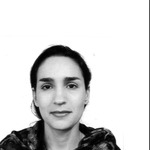 Alexa has worked for The Fundación/Colección Patricia Phelps Cisneros since 2014. Previously, she was the Associate Director of Client Services at sokoloff + associates, llc where she worked with private clients on expanding their collections. From 2007-2009 she was the Marketing Director at the Museum of Modern Art in Medellin, Colombia where she oversaw the branding and commercial strategies of the Museum including the advertising campaigns, published materials, catalogues, the museum store, and other commercial alliances. At the Museum, she was also the head of the capital campaign that raised funds for the completion of the museum’s new home, which opened at the end of 2009. Alexa has also provided independent consulting services for other public and private institutions. Additionally, Alexa is the co-founder of Moving-Desk, an independent post-academic space dedicated to the dissemination of knowledge related to art and contemporary culture. In her “free” time, she is part of not.a.collective in New York. Alexa has an MA in Visual Arts Administration from New York University.