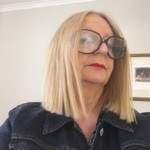 Ewa Partum is a conceptual artist engaged in linguistic activities. She belongs to the first generation of Polish neo-avant-garde and is a precursor of feminist performance art in Poland. In her numerous actions, performances, photographs, installations and experimental films she investigated the structure of artistic language and questioned the structure of the communist public sphere. Already in her early works she scrutinized and revealed a partial position of a female artist in a public discourse. In the early 1970s, Partum founded an independent art gallery (Galeria Adres) and she organised numerous exhibition of Polish and international conceptual artist; international film festivals as well as numerable artistic actions. In 1982 she moved from Warsaw to West Berlin where still she lives and works. In recent years, Partum has participated in many individual and group exhibitions including: Jesteśmy at Zachęta National Gallery of Art in Warsaw in 1991; Wack! Art in the Feminist Revolution at MoCA Los Angeles in 2007; European Contemporary Art Biennale Manifesta 7 in Italy in 2008; re.-act. - feminism - performance art of the 1960s and 70s today at the Akademie der Künste in Berlin; REBELLE. Art and feminism 1969-2009 at Museum voor Moderne Kunst in Arnhem; Gender Check. Feminity and Masculinity in the Art of Eastern Europe at the Museum Moderne Kunst in Vienna in 2009; Promesse du passé at the Centre Pompidou in Paris in 2010; Intense Proximity, La Triennale at the Palais de Tokyo in Paris in 2012; 18th Sydney Biennale in 2012-13; Bigger Splash Painting after Performance in 2012-13 at Tate Modern; Transmissions: Art in Eastern Europe and Latin America, 1960-1980 at MoMA in 2015-16.