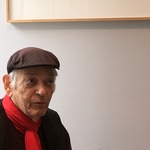 Jaime Davidovich made artwork in the tumultuous years that span from the end of the 1950s to 2016, principally in Argentina and the United States. These are the essential coordinates to begin to tackle his artistic career. Although his work has been characterized by the use of a variety of media and formal resources, this variety becomes coherent when placed not only in an artistic context, but also in the social and political contexts of those years.

Davidovich grew up in the thriving Argentina of the years just after the Second World War. The relations between Buenos Aires and the world were growing closer, and artists were nourished by this contact; a fruitful dialogue with the major international aesthetic tendencies began, particularly with the European post-vanguards. Informalism would be one of the most influential movements among young Argentine artists and, shortly, it would find many followers interested in exploring material beyond the impositions of form. Among these artists was Davidovich who, in addition, took an interest in tachism and North American abstract expressionism, a trend that he had come to know on an early trip to Rio de Janeiro.

The post-War period was also the moment when two key figures broke onto the Argentine political scene: General Juan Domingo Perón and his wife Eva Duarte de Perón, known around the world as Evita. Inspired by Italian fascism, Peronism took root by means of an uncommon use of the mass media as well as a major public propaganda apparatus. Indeed, television came to the Argentine Republic thanks to the foresightedness of Eva Perón, who after a trip to Europe understood the importance of this medium in publicizing the government’s acts and, as a result, decided to encourage it. The first television transmission in Argentina was on October 17th, 1951, the anniversary of the popular protest that had brought General Perón to power six years before.

It is not by chance, then, that Davidovich’s work tends towards a systematic questioning of the media from a contemplative, analytic and conceptual perspective. His first videos are decidedly anti-spectacular and his later work in television is critical, based on parody; it is cultural resistance that lays bare the ideological mechanisms on which television discourse is built.

After a period of visual investigation that leads directly to conceptualism, his work takes a radical turn and, through video, delves deeply into the universe of the mass media. Nonetheless, a thorough observation of the artist’s career undeniably demonstrates his permanent interest in probing the fundaments of the construction of images, both in terms of their relationship to the environment and in terms of the way their circulation binds them to a social and cultural context.

His later work confronts the discursive homogeneity of globalization in an intimate and meditative way.

“I have to go back to New York. I have no choice": Interview with Jaime Davidovich (Part 1) Read More »

“I have to go back to New York. I have no choice": Interview with Jaime Davidovich (Part 2) Read More »
Follow
You must be logged into use this feature Login | Register
Print Share
Twitter Mail
ï Participants