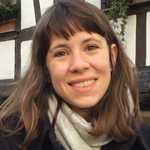 Sophie Cavoulacos is Assistant Curator in the Department of Film where she organizes film programs, exhibitions and is on the selection committee for New Directors/New Films. Selected exhibitions at the Museum include Films From Here: Recent Views from the Arab World (2015); Critical Reverie: The Films of Isaac Julien (2014); and Modern Monday evenings with Semiotext(e) and Raha Raissnia, among others. With Curator Ron Magliozzi, she is co-organizing an exhibition on the East Village alternative space Club 57 (1978-1983), scheduled for 2017, which is accompanied by an initiative to acquire and preserve film and video from the 1970s and 1980s' Downtown New York scene. Prior to joining the Museum in 2012, she worked at the Whitney Museum of American Art, assisting the 2012 Whitney Biennial curatorial team. She earned a BA from the University of Pennsylvania. Recent publications include a catalogue essay for Shezad Dawood: It was a time that was a time (Pioneer Works) and a text on Anna Sanders Films in Peeping Tom's Digest #4: Paris