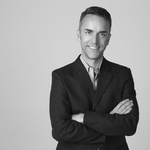 Sean Anderson is Associate Curator in the Department of Architecture and Design. A Fellow of the American Academy in Rome and the Scuola Normale Superiore di Pisa, he has two degrees in architectural design and architectural history from Cornell University, an M. Arch from Princeton University and a Ph.D in art history from the University of California, Los Angeles. Prior to joining MoMA, he practiced as an architect and taught in Afghanistan, Australia, India, Italy, Morocco, Sri Lanka and the U.A.E. His book, Modern Architecture and its Representation in Colonial Eritrea was published in 2015 (Routledge) and is shortlisted for the AIFC "Bridge" award for best book of American nonfiction in 2016. Sean manages the Young Architects Program both in New York and internationally and his first exhibition at MoMA, Insecurities: Tracing Displacement and Shelter, opened in October 2016.