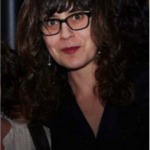 Natalia Brizuela is Associate Professor of Modern and Contemporary Latin American Literature & Culture at the University of California Berkeley, where she also holds appointments in the Arts Research Center and the Critical Theory Program. Her work focuses on photography, film and contemporary art, critical theory and aesthetics of both Spanish America and Brazil.

She is the author of two books on photography. The first, Fotografia e Imperio. Paisagens para um Brasil Moderno (Cia das Letras, 2012) is a study of 19th Century photography in Brasil in its relationship to modern state formation, nationalism, modernization and race. The second, Depois da fotografia. Uma literatura fora de si (Rocco, 2014) is a study of contemporary literature in an expanded field, looking particularly at the relationship between current literary practices and photographic languages, techniques and materialities.

She is also the co-editor of a special issue of the Journal of Latin American Cultural Studies (2015) on photographers Grete Stern and Horacio Coppola, of a book of essays on experimental writer Osvaldo Lamborghini (2008). She recently edited a Special Issue of Film Quarterly on Brazilian filmmaker Eduardo Coutinho (Spring 2016).

She is currently at work on several projects. She is completing an expanded English language version of Depois da fotografia where contemporary post-photographic photography takes center stage. She is also at work on a book of time as critique in contemporary audiovisual practices and aesthetics. She is also co-curating a traveling exhibition of post medium photographic practices from Latin American, slated for opening Fall 2017 in San Francisco, and then traveling to other venues in the US and Latin America.