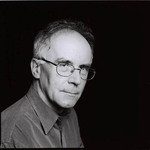 Tomaž Šalamun was an internationally acclaimed Slovenian poet, who was active in neo-avant-garde circles in the 1960s and ‘70s. He became associated, through his brother the painter Andraz Šalamun, with the group OHO. In the early 1960s, he was a contributor to and editor of the magazine Perspektive. Šalamun was arrested in 1964 for publishing his poem “Duma ’64,” which satirized a controversial political figure. Sentenced to twelve years in prison, he served only five days due to international pressure. Through an exchange program in the 1970s, he studied for two years in the United States, which became his second home. Throughotu his lifetime, Šalamun published over forty volumes of poetry in Solvenian, some of which have been translated into over 20 languages. He died in 2014 at the age of 73.