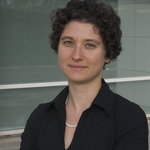 Ksenya Gurshtein is an art historian and currently an Assistant Curator at the Skirball Cultural Center in Los Angeles. Much of her research has focused on unofficial art and culture in post-war Eastern Europe. Her recent publications and curatorial projects include a special issue of the journal Studies in Eastern European Cinema on experimental cinema in post-war Eastern Europe, (co-edited with Sonja Simonyi, 2016), essays on the Slovene painter Bogoslav Kalaš and Moscow Conceptualists Komar & Melamid and Dmitry Prigov, and the film series "Artists, Amateurs, Alternative Spaces: Experimental Cinema in Eastern Europe, 1960-1990" (co-curated with Joanna Raczynska, National Gallery of Art, Washington, D.C., 2014). Her work has been supported by the Getty Research Institute, the Andrew W. Mellon Foundation, and the National Endowment for the Humanities.