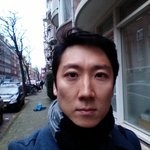 Onejoon Che, a visual artist and filmmaker, started his career as an evidence photographer. For Texas Project (2004-2008), Che photographed the declining red-light district in Miari in Seoul after the government initiated the anti-prostitution law in 2004. He has also produced photographs and short films that capture the trauma of the modern Korean history by documenting the bunkers during the post-Korean War period and the abandoned U.S. Army camps in South Korea after the Iraq War. In 2011, he started doing research on the buildings and monuments in Africa constructed by the North Korean Mansudae Art Studio. By 2015, he has documented and done research in thirteen cities in nine countries (Madagascar, Ethiopia, Gabon, Senegal, Namibia, Zimbabwe, Botswana, Congo and the Republic of South Africa). Mansudae Master Class, which is derived from the real exhibition title of Mansudae Art Studio, consists of a documentary film and photographs with found objects and miniature sculptures.