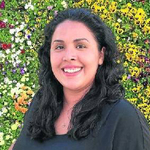 Geaninne Gutiérrez-Guimarães received her BA in art history from Hunter College (CUNY), and is pursuing her MA in art history and museum studies at City College (CUNY). She joined the Guggenheim Museum Bilbao, based in New York, in 2015 as assistant curator. She is primarily responsible for organizing biyearly exhibitions drawn from the Solomon R. Guggenheim Museum collection that travel to Bilbao. She also collaborates on the overall planning of the exhibition programming and acquisitions there. Additionally, she oversees and coordinates the Basque Artist Program, which is a cultural program that annually welcomes two Basque artists to New York to learn about the local art community and to foster artistic dialogue and professional relationships.

Previously, she worked at the Museum of Modern Art in New York in the Department of Drawings where she contributed to several shows and exhibition catalogues, including Tangled Alphabets: León Ferrari and Mira Schendel (2011), Lygia Clark: The Abandonment of Art (2013), and Joaquin Torres-Garcia: The Arcadian Modern (2015). Most recently, she was guest curator of Gego and Gerd Leufert: a dialogue (2014) at the Bertha and Karl Leubsdorf Art Gallery at Hunter College in New York, where she served as the editor and author of the exhibition catalogue. In 2007, she won the MoMA’s Lee Tennenbaum Award in recognition of the creation of the Latin American and Caribbean Fund to purchase works by artists from those countries.