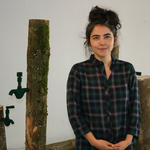 Through sculpture and installation Unzueta intends to bring into discussion the notion of labor. On a first layer its technological, historical and social impact on the human condition and on a second layer its relationship to nature. Most of her work incorporates felt along with other natural materials such as fabric and wood. How she manipulates these materials is as important to her as what is being represented. In this sense the notion of labor does not only exist in a social and historical context, it is present in the fabrication of each artwork. The pieces she constructs are based on architecture and on industrial elements and objects. Her interest in architecture is focused on its symbolic condition, its representation of progress and human development. The interest in industrialized artifacts and machinery is tied to the notion of production. These objects, tools and industrial type constructions, present a physical aspect - that of its possible manipulation or use. As an extension and counterpart of her sculpture practice she has also worked with video and drawing. The video work has been constructed around sculptural actions, many times involving the body as the support of “wearable pieces” and in other occasions by simply intervening non-artistic spaces. These videos explore how the work and body can relate and interact with the environment (non museum or non gallery spaces). Her most recent explorations in drawing intend to be in juxtaposition with her earlier “industrial” based works. They are muse exercises in which natural designs become a new point of observation. Here, a new set of references is taking shape in the form of biological observations of life, plants and sciences.