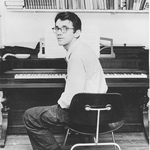 David Tudor (born Philadelphia, 1926; died New York, 1996) was an American composer and pianist. He studied the organ and theory with H. William Hawke, the piano with Josef Martin and Irma Wolpe (later Rademacher), and composition and analysis with Stefan Wolpe. In 1938 he became Hawke’s assistant at Saint Mark’s in Philadelphia, and in 1943 he was appointed organist at Trinity Church, Swarthmore, PA, where he also served as organist at Swarthmore College from 1944 to 1948. His role as a pioneer in the performance of new music was established as early as 1950, when he gave the American premiere of Boulez’s Second Piano Sonata (New York, December 17, 1950).

Although often linked with Cage, Feldman, Wolff, and Brown as a member of the New York School, Tudor did not work under the supervision of these or other composers but prepared his performances independently. During the 1950s and 1960s, he gave first performances of works, many written expressly for him, by Boulez, Brown, Bussotti, Cage, Cardew, Cowell, Feldman, Ichiyanagi, Kagel, Maderna, Nilsson, Pousseur, Stockhausen, Wolff, Wolpe, Young, and many others. His agility in solving the most difficult notational problems of experimental music (he wrote out meticulous realizations of many indeterminate scores) made Tudor a catalyst for the increasingly radical compositional techniques of both the American and the European avant-gardes. From 1954 onwards he made a number of influential appearances in Europe.

Tudor’s performances as a pianist were characterized by finger independence in the highest degree, extraordinary agility in moving instantaneously between dynamic extremes, and the invention of new performance techniques in response to the challenges of experimental music, all executed with a seriousness of purpose and economy of motion that Merce Cunningham (a frequent witness) described as "grace." Yet, it may have been inevitable that the freedoms entrusted to him by composers, his own extensions of the use of sonic materials in his realizations, and his sense of a decrease in the challenge he saw as essential to the composer-performer relationship gradually led Tudor away from piano playing almost entirely and into the field of live electronics.

Here, too, he was a pioneer, as well as a guiding spirit for a new generation of composers and performers, designing his own sources of sound production, transforming conventional sound transmitters (such as loudspeakers) into sound generators, programming feedback as a component of the composition, and mixing both input and output matrices. His works in the medium were often collaborative; many were created for dances by Cunningham, laser productions by Lowell Cross, and visual installations by Jacqueline Matisse Monnier. Some took the form of electroacoustic environments, in which sounds were either activated by audience movements or themselves activated lighting, projections, or sculptures. In the Neural Synthesis series (1992–94) a neural-network chip is used to process both analogue and digital signals, which in turn, Tudor wrote, “are gated by the performer, increasing the complexity and unpredictability of the sonic results.” This double goal had been at the center of Tudor’s reformulation of the capacities of musical performance since he began to explore them, at the piano, 40 years earlier.