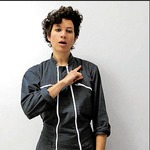 Francisca  Benítez’ (b. 1974, Chile) work  expresses  a  permanent  sensibility and analysis of the relationship between human  beings  and  their  environment,  be  it  natural  or  urban. After training in the field of architecture, her practice began to evolve around the study of public space and the forces that shape it, using the mediums of video, photography, drawing and performance. In recent years, her work has evolved into a  more direct interaction with  the public, creating performative actions that subvert established  boundaries  creating  unexpected  areas  of  coexistence, interaction and dialogue.

“Son  en  Señas”,  her  contribution  to  the  last Havana  Biennial,  is  is  a  collective  creation that explores the poetics of Cuban Sign Language, the work develops from a week of classes, exercises and experiments carried out with the National Association of the Deaf of Cuba. Through this work Benitez attempts to manifest the possibilities of art  to  create  cultural  and  interdisciplinary  bridges  and  develop  a  participatory  piece  where people can be part of a collective creation retaining their individual freedom. Public  presentations  took  place  on  May  22,  the  opening  day  of  the  biennial,  at  the  Wifredo Lam Center, and on May 25 at the National Art School. A video of the process is installed at the Centro de Desarrollo de las Artes Visuales, La Habana, Cuba on view from May 22 until June 22, 2015.