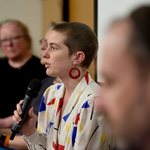 Meghan Forbes is a postdoctoral fellow at the Leonard A. Lauder Research Center for Modern Art at The Metropolitan Museum of Art in New York. Previously, she was the Contemporary and Modern Art Perspectives (C-MAP) Fellow for Central and Eastern Europe at The Museum of Modern Art and was an editor of post.

Dr. Forbes holds a PhD from the University of Michigan, Ann Arbor, having completed her dissertation “In the Middle of It All: Prague, Brno, and the Avant-Garde Networks of Interwar Europe” in 2016. She is currently at work to complete her first book manuscript from this research, which documents historical correspondence, travel accounts, and periodical publications related to previously overlooked networks of exchange between the Czech avant-garde and peers to the East and West. She has received numerous fellowships and grants for this project, including an IIE Fulbright for archival research in Berlin for the 2014-2015 academic year. At the Bauhaus-Archiv there, she researched the connections between the school's leading figures and those of the Czech avant-garde, and her scholarly writing on this subject has been published in the magazine Umění/Art, the journal of the Institute for Art History in Prague. Dr. Forbes has several other peer-reviewed articles forthcoming, and is the sole editor of International Perspectives on Publishing Platforms: Image, Object, Text (Routledge, 2019). A second book project on the photographer Lucia Moholy is also in the early stages.

Elsewhere, Dr. Forbes's reviews, essays, and translations have appeared in Hyperallergic, Literary Hub, Music & Literature, the Los Angeles Review of Books, Words Without Borders, and, of course, on post. Meghan is also the creator and coeditor of harlequin creature, an arts & literary journal that aims to engage the public in creative production through community workshops, conducted at such public institutions as the Solomon R. Guggenheim Museum, Dia:Beacon, and 826. Select issues are available to researchers in The MoMA Library.

Magazines As Sites of Intersection: A New Look at the Bauhaus and VKhUTEMAS Read More »