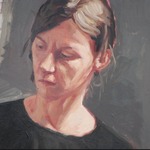 Natalia Babarovic was born in Santiago, Chile in 1966. She studied art at the University of Chile, where she also worked from 1991 to 2006, first as an assistant and later as Adjunct Professor. In 1998, she completed her Master’s in Visual Arts at the same university. At various points over the 1990s she was a studio assistant for Arturo Duclos, Gonzalo Díaz, Carlos Altamirano and Carlos Leppe. In 1996 and 1998, she and a group of writer friends published two issues of a literary magazine, Patagonia. She had her first exhibition, El lugar de la cita [The Meeting Place], at the Goethe Institut, Santiago in 1989. In 1994, she mounted a joint exhibition with Pablo Langlois at Galería Gabriela Mistral in Santiago, a painting installation, which took its title, Cautiverio feliz [A Happy Captivity], from a book of the same name by 17th century Chilean writer Francisco Núñez about his time as a prisoner of the Mapuches. In 1994, she and Voluspa Jarpa completed El sitio de Rancagua [The Siege of Rancagua], a large historical mural that remains on permanent display at the train station in Rancagua, Chile. In 1996, she showed Varios lugares [Different Places] as part of a group exhibition at the National Museum of Fine Arts in Santiago, and this work was also exhibited in 1997 in Prospect and Perspective: Revent Art From Chile, a group exhibition curated by Beverly Adams at the San Antonio Museum of Modern Art. In 1999, then living in London, she had an individual exhibition called Tombs and River at Mafuji Gallery, an artist-run space in Hackney. Back in Chile, in 2005, she exhibited a follow-up to Cautiverio feliz at Sala Gasco, Santiago. In 2008, she had an individual exhibition titled 1979 at Galleria D21in Santiago. More recently, in December 2014, an individual exhibition, Cómo desaparecer completamente [How to Disappear Completely], brought together three years' worth of new work on two floors of the Museum of Visual Arts (MAVI) in Santiago. That exhibition was followed up by the publication of a short book, Lucinda: la pista que falta Lucinda: The Missing Clue, with a text by Bruno Cuneo and two by the artist, one on landscape as seen from car or train windows and one titled “Sobre los pantallazos y otras fuentes de luz” [“Screenshots and other light sources”]. Also in late 2014, the artist executed a multi-panel mural titled Travesía [Crossing] for the Valparaiso Natural History Museum, commissioned by the national Libraries, Archives and Museums Service. In May 2015, she inaugurated Instantáneas [Snapshots], an exhibition of her most recent paintings, at Galería XS in Santiago. She currently runs an art workshop at Andrés Bello University and, with the writer Roberto Merino, teaches an elective course on forms and variations of realism at Diego Portales University.