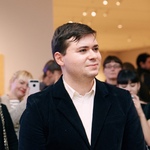 Giampaolo Bianconi is a Curatorial Assistant in the Department of Media and Performance Art at The Museum of Modern Art, New York. He is the curator of Thinking Machines: Art and Design in the Computer Age, 1959-1989 (2017) and Projects 105: Cinthia Marcelle (2016). He has worked on numerous exhibitions and programs including BRUCE CONNER: IT’S ALL TRUE (2016), Transmissions: Art in Latin America and Eastern Europe, 1960-1980 (2015) and Yvonne Rainer: The Concept of Dust, or How do you look when there's nothing left to move? (2015). Prior to MoMA, he worked for Rhizome, The Film Society of Lincoln Center, and the Whitney Museum. Bianconi received his M.A. from Columbia University and B.A. from Bard College. His writing has appeared in Rhizome, Film Comment, n+1, and Incite.