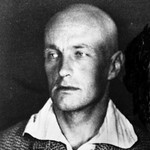 Władysław Strzemiński (1893-1952) was a Polish art theoretician, painter, designer of "functional" prints, pioneer of the Constructivist avant-garde of the 1920s and 1930s, and creator of the theory of Unism.

Born in Minsk in Belarus, Strzemiński served in the Tsarist Army during the I World War, and subsequently studied in the post-Revolutionary academies in Moscow, Vkhutemas and Inkhuk. In 1920–22 he was associated with Unovis, and during this period he was influenced by Malevich and Suprematism. In 1921 he married the Russian sculptor Katarzyna Kobro, and moved with her to Poland. He published his first articles on the Russian avant-garde in the Kraków periodical Zwrotnica in 1922. Strzemiński organized the Wystawa Nowej Sztuki (Exhibition of new art) in Wilno (now Vilnius, Lithuania) in 1923, which acted as a manifesto of Polish Constructivism. With Strzemiński’s help, in 1924 the first Polish Constructivist group, Blok, was formed in Warsaw. He took part in all its exhibitions and published articles in the periodical Blok.

In the second half of the 1920s Strzemiński lived in a number of small towns in the Łódź region: Szczekociny, Brzeziny and, later, Koluszki, where he attempted to set up a school of art in the manner of the Bauhaus or Vkhutemas. After leaving Blok, in 1926 he joined the Praesens group, set up by functionalist architects and constructivist painters. In its first exhibition he showed projects for typography and interiors. In 1923–7 he worked on the theory of Unism, and in 1928 his Unizm w malarstwie (Unism in painting) was published by Praesens. In 1929 Strzemiński completed a book written together with Katarzyna Kobro, Kompozycja przestrzeni (The composition of space; publ. 1931). In 1929 Strzemiński left Praesens and co-founded the a.r. group. In February 1931 a permanent exhibition, the International Collection of Art, set up on Strzemiński’s initiative and presented by a.r., opened in the Museum of Art in Łódź, where Strzemiński and Kobro moved the same year.

About 1934 Strzemiński returned to representational art in his sea landscape series and during the II World War, he produced a series of drawings on the topic (e.g. Deportations, 1940, and Civil War, 1941). After the War Strzemiński taught art history at the State Higher School of Applied Art, Łódź, which he co-founded (1945). Dismissed from his post in 1950 with the intensification of the Stalinist regime, he was effectively deprived of the means of making a livelihood and died of tuberculosis. During his last years he attempted to effect a compromise with the principles of Socialist Realism, but the works he produced were unacceptable to the cultural authorities. At the same time, he completed work on his book Teoria widzenia (‘A theory of vision’). In this work he interpreted art from earliest times to the 20th century in terms of Marxist categories and developed a theory of the evolution of artistic forms defined in each period specifically by its dialectic of realism and formalism.