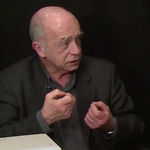 Jarosław Kozłowski (b. 1945) is professor at University of Arts in Poznań, Poland, where he has been teaching painting and drawing since 1967, and where he served as the school’s Dean between 1981 and 87. His artistic practice, mainly characterized as conceptual, encompasses drawing, painting, installation, performance, photography, and artists books. He has authored numerous theoretical texts. In 1971, together with Andrzej Kostołowski, Kozłowski founded NET, an international network of artists communicating through mail. He was also founder and manager of gallery Akumulatory 2 (1972-1989) that exhibited a wide array of experimental and conceptual artists from around the world. Akumulatory 2 became one of the most important alternative art spaces in the socialist Poland. Kozłowski lectured at the Statens Kunstakademi in Oslo, Rijksakademie in Amsterdam, Adam Mickiewicz University in Poznań, and exhibited internationally. He has been professor and mentor to many contemporary Polish artists who debuted in the 1990s and 2000s. Kozłowski’s life-long engagement with art has been recently summed up in two exhibitions and publications: Beyond Corrupted Eye: Akumulatory 2 Gallery 1972-1989 exhibited at Zachęta–National Gallery of Art in Warsaw (2012), and NET: The Art of Dialogue in Profile Gallery in Warsaw (2012-2013).