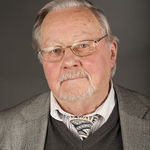 Vytautas Landsbergis, born in Kaunas, Lithuania in 1932, is music professor and politician. He was the first head of state of Lithuania after its independence declaration from the Soviet Union, and served as the Head of the Lithuanian Parliament, Seimas.

In 1955, Landsbergis graduated from the Lithuanian Conservatory of Music (now Lithuanian Academy of Music and Theatre), to become a full professor there in 1978. From 1978 to 1990, he was a professor at both the Lithuanian Conservatory and the Vilnius Pedagogical University. It was in Vilnius in 1966 that he organized the first Fluxus Event in Lithuania, the outcome of his correspondence with his childhood friend, George Maciunas.

Landsbergis has authored twenty books on a variety of topics, including a biography of Mikalojus Konstantinas Čiurlionis, as well as works on politics and music. He entered politics in 1988, as one of the founders of Sąjūdis, the Lithuanian pro-independence political movement. After Sąjūdis' victory in the 1990 elections, he became the Chairman of the Supreme Council of Lithuania. On March 11, 1990, he headed the Parliamentary session during which the restoration of Lithuanian independence from the Soviet Union was declared. In 2004, Landsbergis was elected by Lithuanian voters to the European Parliament and held the position until 2014.

“Revolution Not Only In The Arts, But In Connection.” Interview with Vytautas Landsbergis Read More »