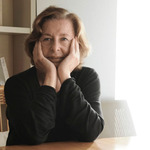 Adriana Valdés was born in Santiago, Chile, in 1943, where she now lives and works. She studied literature at The Catholic University of Chile and was a professor there between 1965 and 1975. In 1970 she co-founded Taller de Letras, an academic review that is published up to this day. The University was taken over by the military after the September 1973 coup. In 1974 she passed the United Nations international examination for translators and joined the Organization's professional staff in 1975. She took early retirement after a successful 25-year career at the UN Economic Commission for Latin America and the Caribbean. She resumed academic activity at the University of Chile, where she taught a number of post-graduate seminars on art writing. She aims now - so far unsuccessfully - to move towards a more secluded life.

She started writing about Chilean art in 1977, with a number of other academics and writers - Enrique Lihn, Ronald Kay, Nelly Richard, Cristián Huneeus and others - as a form of resistance. Many Chilean artists and critics had been forced into exile, and a new "scene" was emerging, invisible to the media. She wrote on Eugenio Dittborn, Roser Bru, Carlos Leppe and other artists during this difficult period. In 1981 she wrote the first essay ever on Alfredo Jaar, just before he left the country.

Some of her essays written between 1976 and 2006 were gathered in the books Composición de Lugar - Ensayos Sobre Cultura (1996) and Memorias Visuales-Arte Contemporáneo en Chile (2006). She is also the author of Enrique Lihn, Vistas Parciales (2008) and De Àngeles y Ninfas - Conjeturas Sobre la Imagen en Warburg y Benjamin (2012). With Alfredo Jaar, she wrote Estudios Sobre la Felicidad (1999). She has edited and published the posthumous work of the poet Enrique Lihn (1929-1988), including both his last book of poetry and his Escritos Sobre Arte, this last one with Ana María Risco.

She also edited Alfredo Jaar's Jaar SCL 2006, the catalogue for his first major exhibition in Chile, the Chilean edition of his La Política de las Imágenes (2008), and Venezia, the book he produced for the 2013 Venice Biennale. She has written several essays on Eugenio Dittborn, in 1979,1985,1992,1997, 1998 and 2005, most of them published in connection with his exhibitions both in Chile and abroad.

Eugenio Dittborn: From the 1970s to the Present Read More »