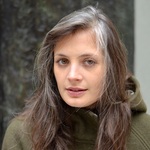 Cara Manes is Associate Curator in the Department of Painting and Sculpture at The Museum of Modern Art, where she works extensively on the ongoing displays the collection galleries and sculpture garden, as well as on temporary exhibitions. Most recently she organized Artist's Choice: Peter Fischli (2018, co-organized with Peter Fischli); Studio Visit (2018, co-organized with Ann Temkin); The Long Run (2017, co-organized with Paulina Pobocha); Projects 104: Nástio Mosquito (2016); and Take an Object (2015). She has also contributed to numerous other exhibitions, including Ellsworth Kelly: The Chatham Series (2013), Artist's Choice: Trisha Donnelly (2012), and Bauhaus 1919-1933: Workshops for Modernity (2009). Manes' writing has appeared in a variety of publications, including Among Others (MoMA, fall 2019), Being Modern (Fondation Louis Vuitton, 2017), Hans Arp and the United States (Stiftung Arp, 2016), and Films and Videos by Robert Morris (Museu Serralves, 2011). She holds degrees from Wellesley College and The City University of New York.

Seeing Sheela Gowda’s “of all people” in Bangalore Read More »