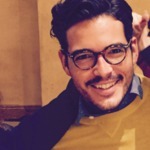 Jerónimo was the C-MAP (Contemporary and Modern Art Perspectives) Fellow for Latin America at the Museum of Modern Art in New York City. He is a PhD candidate in Spanish and Latin American Literatures and Visual Studies at Harvard University. He holds a B.A. in Law and Literature, an M.A. in Literature and Modern and Contemporary Art History and Theory from Universidad de los Andes in Bogotá, and an M.A. in Romance Languages and Literatures from Harvard University.

His research cultivates dialogues between Contemporary Latin American Visual Arts and Literatures. His work produces projects deeply rooted in pertinent academic research that encourage conversations between both scholarly and non-scholarly audiences, and that present artistic practices as communal experiences rather than as inaccessible objects. He has worked as an editor, curator, researcher and teacher.