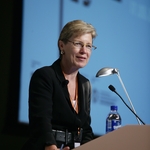 Jane DeBevoise is Chair of the Board of Directors of Asia Art Archive in Hong Kong and New York. Prior to moving to Hong Kong in 2002, Ms. DeBevoise was Deputy Director of the Guggenheim Museum, responsible for museum operations and exhibitions globally. She joined the Museum in 1996 as Project Director of China: 5000 Years, a large-scale exhibition of traditional and modern Chinese art that was presented in 1998 at the Guggenheim museums in New York and Bilbao. Ms. DeBevoise has an MA from the University of California, Berkeley, and a PhD from The University of Hong Kong, both in art history. Her recent book Between State and Market: Chinese Contemporary Art in the Post-Mao Era was published in 2014 by Brill. Ms. DeBevoise was appointed by the Home Affairs Bureau of the Hong Kong Government to the Committee for Museums 2004-2007 and to the Museums Advisory Group for the development of the West Kowloon Cultural District 2006 - 2007. She has been a Trustee of Asian Cultural Council, New York since 2009.

The Archival Impulse: Collecting and Conserving the Moving Image in Asia Read More »