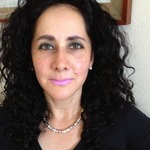 Cecilia Fajardo-Hill is an independent British/Venezuelan art historian and curator of modern and contemporary art, specializing in Latin American art. She has a PhD in Art History from the University of Essex, England, and an MA in 20th Century Art History from the Courtauld Institute of Art, London, England. Presently, Fajardo-Hill is guest curator at the Hammer Museum and a visiting scholar at the UCLA Chicano Studies Research Center, Los Angeles. She is co-curating, with Andrea Giunta, the exhibition Radical Women in Latin American Art 1960–1985, a survey of radical artistic practices by women artists in Latin America, which will open in 2017 at the Hammer Museum under the Getty’s initiative Pacific Standard Time LA/LA. Fajardo-Hill is also working on the Sayago & Pardon initiative Abstraction in Action, a multiplatform project on contemporary abstraction in Latin America, which will encompass a series of exhibitions. She was guest curator at the Vincent Price Art Museum, Los Angeles, for the exhibition Ricardo Valverde: Experimental Sights, 1971–1996 in May 2014, and the general curator of the 19 Bienal de Arte Paiz in Guatemala in June 2014.