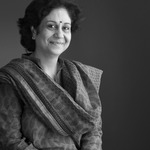 Gayatri Sinha is an art editor, critic and curator. Her primary areas of inquiry are in gender and iconography, media and the study of classical texts.

She is the founder of criticalcollective.in, India’s first web based archive and news magazine on art.

“Partition is what we are living even now”: A Conversation with Nalini Malani Read More »

“Picabia Bothers Me Every Morning”: A Conversation with Atul Dodiya Read More »