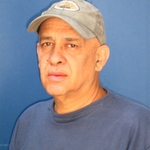 Cildo Meireles (born 1948, Rio de Janeiro, Brazil) is one of Brazil's most significant artists of the post-war period. A pioneer of installation art since the 1960s, Meireles is best known for his dramatic and politically charged walk-in environments, which often incorporate sound, smell and touch alongside visual experience, requiring the viewer's full perceptual involvement. His installation Atraves (Through, 1983-89) confronts the viewer with a prohibitive labyrinth of grilles, meshes and barriers of all descriptions, the floor covered in shimmering yet dangerous shards of broken glass. In this and other works, surprises and contradictions combine to scramble our habitual definitions of our environment, resulting in a metaphor of the imperfect, potentially hostile world in which we live. In other works, Meireles offers an alternative - visual, political, sensual - to the real but often disappointing circumstances around us. For several decades Meireles has been included in the most significant international surveys, from the landmark Information exhibition at The Museum of Modern Art in 1970 to the 24th Biennial of Sao Paulo in 1998.