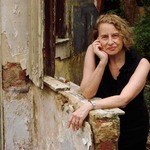 Geiger (Rio de Janeiro, 1933) studied Linguistics and Anglo-Germanic Language and Literature in Brazil and Sociology and Art History at NYU and the Metropolitan Museum of Art. Geiger is a Brazilian multi-disciplinary artist and professor at the Escola de Artes Visuais do Parque Lage. She lives in Rio de Janeiro. Geiger first graduated in literature and language, and later in the 1950s, studied art at Rio's Instituto Fayga Ostrower. She moved to New York in 1954. In 1965 she attended an engraving workshop at the Museo de Arte Moderno, where she began teaching three years later. She returned to New York in 1969 to teach at Columbia University, returning again to Rio in 1970.

Geiger has had major solo exhibitions such as On a Certain Piece of Land at Red Gate Gallery, Beijing in 2005 and Projects: Videos XXI at MoMA in 1978. Geiger received the Guggenheim Fellowship in 1982 and her work is part of collections such as MACBA in Barcelona, The Getty in Los Angeles, Centre Georges Pompidou in Paris and MoMA in New York. Geiger has taken part in numerous collective exhibitions such as Espai de Lectura 1: Brasil at MACBA, Barcelona in 2009; Modern Women Single Channel at MoMA PS1, New York in 2011; and Video Vintáge at the Centre Pompidou, Paris in 2012. She represented Brazil in the XXXIX Venice Biennale in 1980.

"I Didn't Invent the Map." A Conversation with Anna Bella Geiger Read More »