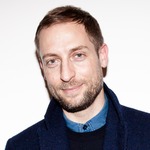 Stuart Comer is the Chief Curator of the Department of Media and Performance Art at The Museum of Modern Art, New York. He oversees the department’s program of special exhibitions and performances, installations from the collection, and acquisitions. Cut to Swipe, his first exhibition at MoMA, runs from October 11, 2014 to March 22, 2015. He was co-curator of the Whitney Museum of American Art's 2014 Biennial and previously served as the first Curator of Film at Tate Modern, London, UK where he oversaw film and video work for the Tate Collection and Displays and was co-curator for the opening program of the Tanks at Tate Modern. He is the editor of Film and Video Art (Tate Publishing, 2009) and has contributed to several publications and numerous periodicals including Artforum, Frieze, Afterall, Mousse, Parkett, and Art Review.

The Belated Funeral as Performance: A Dialogue with Minouk Lim Read More »

“Partition is what we are living even now”: A Conversation with Nalini Malani Read More »

“Picabia Bothers Me Every Morning”: A Conversation with Atul Dodiya Read More »