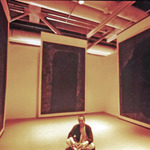 Yang Jiechang (born in Guangdong, China, 1956) studied from 1974-78 at the Foshan Folk-Art Institute in Guangdong, China. In 1982 he graduated from the Chinese Painting department of the Guangzhou Fine Arts Academy, China. His formal training was primarily focused in traditional Chinese painting, and the ancient technique of collage on paper. Yang then began a rigorous study of Taoism and Zen Buddhism with the Taoist master, Huangtao. Yang combined his Taoist studies and his formal education to construct his own mental, spiritual and visual language. He chose to abandon all color, representation, allusion and symbolism. Yang is rooted in his traditional artistic background, and paints only in traditional Chinese ink, layered in some places with collaged rice paper. The results are images that both absorb and reflect light, allowing a simultaneity of darkness and luminosity within his works. Yang believes that it is important for the process of artistic creation and its results to be a kind of spiritual meditation.

Yang Jiechang has also participated in numerous group exhibitions, such as: Advance through Retreat at the Rockbund Art Museum, Shanghai, China (2014), China's Changing Landscape at the Nordic Watercolor Museum, Sweden (2014), Zizhiqu/Autonomous Regions at the Times Museum Guangzhou, China (2013), and From Gesture to Language at the Rockbund Art Museum, Shanghai, China (2013). Yang's work was featured in the first group show devoted solely to the contemporary art of China, Ink Art, Past as Present in Contemporary China at the Metropolitan Museum of Art in New York (2013).

Yang lives and works in Paris and Heidelberg.

Action Painting is Not Calligraphy: A Conversation with Yang Jiechang Read More »