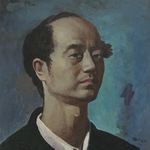 Yu Youhan (born in Shanghai, China in 1943), is an artist working and residing in Shanghai. In 1970, Yu graduated from the Central Academy of Art and Design, Beijing, and in 1973 became a teacher at the Shanghai Institute of Industrial Arts. Yu began his career as an abstract painter, but in the late 1980's began a decisive shift towards new modes of representation. Yu grew up steeped in the imagery of the Cultural Revolution in China, and his movement away from the abstract, mostly monochrome painting of his early career was influenced by the propaganda posters and iconography that surrounded him as a young adult. Yu began to appropriate official imagery, and fuse Chinese iconography with Western artistic expression. His Mao series, which he developed in 1988, received international acclaim and helped facilitate Yu's emergence as one of the most important and well-known artists of Political Pop art in China.