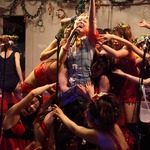 Banana Gakuen was founded in 2008 at a Japanese university. However, due to the violent and chaotic nature of the performance, they were forced by the school to disband. For the show, most of the performers, men included, wear Japanese schoolgirl uniforms. The uniforms are never removed, and, coupled with dance, they represent the often selfish behavior of a teenager. The main characteristic of the group is to showcase pop, anime, and Otaku (geek) culture among Japan’s youth. Capturing the emotions of a young generation, the performance is both chaotic and expressive. We can experience “momentary pleasure,” but it is not forever because we live in a disposable generation. Everything finishes before it even starts.

Toco Nikaido is the founder, as well as director, choreographer, and actress, of Banana Gakuen. She was born in 1986 in Hokkaido, Japan. While in school she became a chika (underground) idol, which are nonmainstream pop figures who mainly operate in live shows rather than on TV. During the early performances of Banana Gakuen, most of the acts were scripted. However, as time has progressed, they have integrated more improvisation. Nikaido has become popular, not only among those from her generation but also with the older generation, who were part of a student movement in the 1960s and '70s.