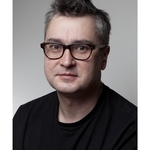 Tomáš Pospiszyl (*1967) is a Czech critic, curator and art historian. He studied at Charles University in Prague and Bard College in New York. He worked as a curator at The National Gallery in Prague (1997-2002), and was a research fellow at The Museum of Modern Art in New York (2000). Since 2003 he teaches Art History at the Film and TV School of the Academy of Performing Arts in Prague and since 2012 at the Academy of Fine Arts in Prague. Projects authored by Tomáš Pospiszyl range from period of early modernism, mid 20th century avant-garde to contemporary art. He is particularly interested in popular culture (book Octobriana and Russian Underground, 2004, book and exhibition Planet Eden, 2010) and art created during the Cold War on both sides of the Iron Curtain (collection of essays Comparative Studies, 2005, book on public art from the time of socialism Aliens and Herons, 2014). He serves at the board of tranzit.cz, an art initiative in the Czech Republic, for which he prepared exhibitions, lectures and public programs, most recently performative exhibition Július Koller Archive: Study Room, 2012. He edited volume on photographers Lukas Jasansky/Martin Polak (JRP Ringier and tranzit, 2012). His latest book is a collection of essays An Associative History of Art, tranzit 2014). His publications in English include, among others, an anthology Primary Documents; A Sourcebook for Eastern and Central European Art since the 1950s, which he edited together with Laura Hoptman, (MIT Press, MoMA, 2002).

By Tomáš Pospiszyl
Posted on 24 Apr

There are two contributions to Poema Colectivo by Artists from former Czechoslovakia. The first piece was made by Jan Antonín Pacák (1941-2007), illustrator and a drummer of popular rock band Olympic. He was not directly connected to local progressive art community and fully concentrated on commisions from the field of graphic design and illustration.

The second one is by Tomáš Haleš (1955). Motive of open net or bars have clearly political connpotation. The work also includes four names of artists active in the region of Northern Moravia, where Haleš was from. I have no closer information on graphic artist Inge Popelková and artist, teacher and activist Radana Parmová. Petr Ševčík was mail artist and poet, not active today. Eduard Ovčáček (1933) is an important figure of Czech lettrist and structural art. What may be more important in this context is a fact, that Ovčáček signed Charta 77, an anti-governement petition in Czechoslovakia. Tomáš Haleš signed it as well and was forced to leave the country in 1986 (He lives in Vienna now). Thus the list of names may refer to friends or figures of respect that were persecuted in that time. Now it gets interesting: Haleš, Ovčáček and Ševčík took all part in Minisalon, a mail art project initiated in Czechoslovakia in 1984. Its principle was close to Poema Colectivo Revolucion. Its organizer Joska Skalnik send some 400 empty wooden boxes of dimensions 15 x 15 x 15 cm to different artists off official art circles. It was up to them to fill the box and send it back. I can only speculate if there was an inspiration from Mexico or is it just a coincidence. Attached see Minisalon entries by Haleš and Ovčáček.

There are two contributions to Poema Colectivo by Artists from former Czechoslovakia. The first piece was made by Jan Antonín Pacák (1941-2007), illustrator and a drummer of popular rock band Olympic. He was not...