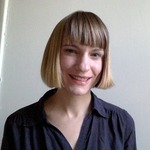 Phoebe Springstubb is a Curatorial Assistant in the Department of Architecture and Design at The Museum of Modern Art. At MoMA, she has worked on the exhibitions Le Corbusier: An Atlas of Modern Landscapes (2013), Cut ‘n’ Paste: From Architectural Assemblage to Collage City (2013), and Frank Lloyd Wright and the City: Density vs. Dispersal (2014). She holds an AB in Architecture and an MArch from Princeton University. Her research interests include the intersections of landscape and technology and the economic aspects of twentieth-century architecture. Previously, she worked as an architect for Toshiko Mori Architect, where her projects included an exhibition design for the Cooper-Hewitt, National Design Museum.