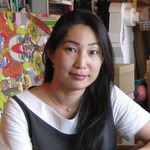 Hiroko Ikegami is an associate professor in the Graduate School of Intercultural Studies at Kobe University and specializes in post-1945 American art and its global impact. She received her PhD from Yale University in 2007. Her main publications include The Great Migrator: Robert Rauschenberg and the Global Rise of American Art (Cambridge, Mass.: The MIT Press, 2010) and “ROCI East: Rauschenberg’s Encounters in China,” in East-West Interchanges in American Art: A Long and Tumultuous Relationship (Washington, D.C.: Smithsonian Institution Scholarly Press, 2011). In 2012, she co-curated Shinohara Pops! The Avant-Garde Road, Tokyo/New York at the Samuel Dorsky Museum of SUNY New Paltz. She is currently working on the topic of Pop Art in Japan and serves as a consulting curator for International Pop, an exhibition scheduled to open at the Walker Art Center in April 2015. Since 2006, she has served as vice director of the Oral History Archives of Japanese Art, an organization devoted to conducting interviews with individuals involved in the field of art in Japan, and making the transcripts available online as historical documents.