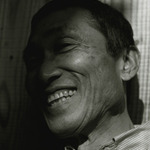 Akasegawa Genpei is a pseudonym of Japanese artist Akasegawa Katsuhiko (born March 27, 1937 in Yokohama). He used another pen name, Otsuji Katsuhiko, for literary works. During the 1950s and 1960s, Akasegawa became involved within the Neo-Dada movement, along with Ushio Shinohara, Shusaku Arakawa, and Yoshimura Masanobu. He formed the Hi-Red Center with Jiro Takamatsu and Natsuyuki Nakanishi during this time, which was a group of artists that presented their works as a collective in Japan. They performed "Happenings" within the Hi-Red Center. Akasegawa was also associated with the avant-garde. In the 1970s he used the idea of "Hyper-Art" -- an ordinary but useless street object that happened to look like conceptual artwork. As Otsuji Katsuhiko, he received the Akutagawa Prize in 1981 for his short story, "Chichi ga kieta." Akasegawa is known for many humorous essays, and his 1988 book Rojinryoku was a major hit. In January 1963, Akasegawa sent out invitations to a solo exhibition at a gallery in Tokyo. The announcement was delievered to several close friends in a cash envelope that was mailed through the postal service. The announcement itself was a 1,000-yen note reproduced in monochromatic colors on the front, with relevant information regarding the exhibit on the back. He produced four more during the next year. In January 1964, his 1,000-yen note partial reproductions became noticed by the police and he was indicted for creating imitations of banknotes stemming from the 1894 Law Controlling the Imitation of Currency and Securities. In August 1966, he went on trial for what was dubbed the "Thousand-Yen Bill Incident." In June 1967, he was found guilty with three months suspended sentence. He appealed twice, but the decision was upheld in 1970.