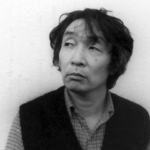 Born in Tokyo in 1929, Awazu was self-taught in painting and design. In 1955, he received the Japan Advertising Artists Club Award, and in 1958 won the Grand Prix at the World Film Poster Competition in France. In 1959, he established the Awazu Design Institute, now called the Awazu Design Room. While consistently remaining among the top ranks of Japanese designers, throughout his career, Awazu has engaged in a remarkably broad range of activities. These have included urban design, exhibition design and film production, and have been in collaboration with artists from fields spanning from architecture to music to literature to cinema. In 1997-8, a grand retrospective of his works was held in Poland at four national art museums. In more recent years, he has focused on visual communication, the very genesis of all design artistry through studies in areas such as pictographs and rock art, and he has launched works employing diverse production methods. He is also a prolific writer, including Dezain no hakken ('Design Discoveries'), Dezain ni nani ga dekiru ka ('The Possibilities of Design'), and the most recent Rock Art (Filmart-Sha Co., Ltd.).

His works are included in the permanent collections of the Museum of Modern Art (New York), Stedelijk Museum (Amsterdam), and the Museum of Modern Art, Toyama. Major awards received to date include a Japan Academy Award for art direction of the film Shinju Tenno-Amijima ('Double Suicide at Tenno-Amijima') in 1969, a Silver Medal and Special Mention at the 1970 Warsaw International Poster Biennale, and a Purple Ribbon Medal, awarded by the Japanese government to persons of outstanding artistic merit, in 1990.