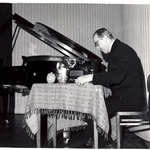 Bogusław Schaeffer (born 1929) is the leading exponent of the post-war Polish avant-garde, working not only in music but also in literature, theatre and visual arts. His massive composing oeuvre comprises over 600 pieces, only a fraction of which was produced in the Polish Radio Experimental Studio (17 autonomous compositions and several dozens film and theater musical illustrations). Schaeffer cooperated with this institution between 1966 and 1976, but his electroacoustic interests have been developing in various Polish and European centers up to today. Schaeffer’s works produced at the Studio, however, are considered milestones in the field of reflection on the aesthetics of musique concrete and Elektronische Musik as well as their relations with more or less traditionally understood performing techniques and poliversionist concept of the musical work.

The Future Sound of Warsaw: Introduction to PRES Read More »