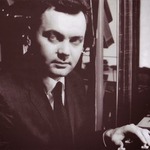 Bohdan Mazurek (born 1937) started working at Polish Radio Experimental Studio in 1962, four years later he created his first electroacoustic pieces. His output comprises of 30 autonomous pieces (many of which received critical acclaim and awards at international composing competitions), and hundreds of pieces for film, radio and theatre, as well as pioneering works in the field of multimedia and electroacoustic improvisation. As a music producer Mazurek collaborated with many great composers like Bogusław Schaeffer, Tomasz Sikorski, Lejaren Hiller and Kare Kolberg.