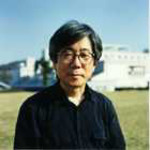 Kosugi studied musicology at the National University of Fine Arts and Music in Tokyo and graduated in 1962. With the foundation in 1960 of Group Ongaku, he began his work in group improvisation and event music. Works such as South II (1964) and Instrumental Music (1965) were performed by the avante-garde performance group Fluxus during his stay in the USA, mainly in New York, from 1965 to 1967. He established the electro-acoustic group Taj Mahal Travelers in 1969 and performed music for mixed media with them until 1975. After emigrating to the USA in 1977 he was active as a composer and performer with the Merce Cunningham Dance Company, along with Cage and DAvid Tudor. In 1955, he became its musical director. Among the many exhibitions and festivals at which he presented sound installations was Für Augen und Ohren, held in Berlin in 1980. In 1994 he won the John Cage Award for Music. His interests lie in Messiaen's rhythmic modes and in jazz, rock and folk music. His performances on the electric violin and on electric modulation devices are informed by oriental sonic gestures.