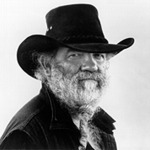 La Monte Young was an exponent of experimental "drone" music and an originator of Minimalism (whose diverse practitioners include Terry Riley, Steve Reich and Philip Glass). An avid and talented jazz musician, Young performed with legendary figures Ornette Coleman and Don Cherry. In 1960 Young moved to New York and galvanized a receptive circle of Cage-inspired artists and composers. Young's most significant contribution to this milieu were his Compositions 1960: short, textual scores, with instructions such as: set a butterfly loose in the concert hall or light a fire, and simple actions, such as his famous "Draw a Straight Line and Follow it," appropriated later by Nam June Paik as a Fluxus performance. In 1961 Young arranged highly significant concerts at Harvard University, Yoko Ono's Chamber Street loft, and at George Maciunas' AG Gallery in New York. Young soon left the Cage circle, defining his own distinct approaches and composition models.