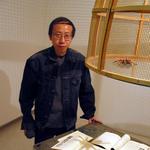 Huang Yong Ｐing (born in Xiamen, China, 1954) is an artist who lives and works in Paris. Huang graduated from the Fine Arts Academy of Zhejiang, Zhejiang, China (1989). Previous to Huang’s emigration to Paris in 1989 he was a founding member of Xiamen Dada group, a radical avant-garde artist collective. Huang is a self taught student of Joseph Beuys, John Cage, and Marcel Duchamp.

Huang was a part of the groundbreaking exhibition Magiciens de la Terre (1989) at Centre Pompidou, Paris. He was the representative of France at the 48th Venice Biennale (1999). Huang’s retrospective, House of Oracles was presented at the Walker Art Center, Minneapolis, USA and traveled to Mass MoCA, North Adams, Massachusetts, USA, Vancouver Art Gallery, Vancouver, Canada, and Ullens Center, Beijing, China.

When and Where Is China? Contemporary Chinese Art in 1993 and Beyond
Yu-Chieh Li