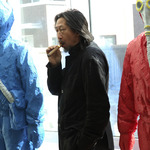 Wang Guangyi (Born in Harbin, Heilongjiang, China, 1957) is a contemporary painter and sculptor who lives and works in Beijing. Wang graduated with a degree in oil painting from Zhejiang Academy of Art (1984).

Wang is part of a group of artists seeking objective values external to Eastern and Western cultures. His prolific body of work explores ideological systems of value including religion, capitalism, and spirituality. Wang’s art does not present a set analysis, instead allowing the viewer multiple interpretations. The work endeavors to offer spectators the ability to be objective. A common thread in Wang’s work is the Kantian idea of thing-in-itself, presenting images as reference to an inexpressible authenticity that is outside sensory awareness.