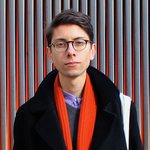 Sean Nesselrode Moncada is a PhD candidate at the Institute of Fine Arts, New York University. He specializes in modern and contemporary Latin American art, with a focus on twentieth-century Venezuela. His dissertation project examines the development of Venezuelan modernism(s) through the lens of petroleum as a real and imagined source of progress.

Dislocations and Decapitations: On the Venezuelan Responses to "Revolución"

Included among the some three hundred fifty contributions to the Poema Colectivo: Revolución (Collective Poem: Revolution) are two works by Venezuelan artists, Dámaso Ogaz (1924–1990) and Carlos Zerpa (1950– ). Though members of different generations—Ogaz was three years away from his sixtieth birthday; Zerpa had recently turned thirty—both men have since become celebrated pioneers of the development of conceptualism in Venezuela. Both maintained a playfully irreverent yet committed stance against artistic (and ideological) conservatism, an interest in anti-commercial art practices, and a desire to push beyond the strictures imposed by fervent nationalism.

By 1981 Ogaz had established himself as an idiosyncratic yet influential member of the Venezuelan artistic vanguard, though he was very much an international figure. Born Victor Manuel Sánchez-Ogaz in Santiago, Chile, he did not settle permanently in Caracas until 1967, when he joined the radical artistic collective El Techo de la Ballena (The Roof of the Whale) at the invitation of Carlos Contramaestre, one of the group’s founders. An informal, politically radical circle of artists, poets, and critics, El Techo realized some of the first and most notorious public interventions in the country’s history, treating the spectacle of scandal as a proto-conceptualist tactic in and of itself. As a member of the group, and continuing beyond its dissolution in 1968, Ogaz experimented with unconventional techniques such as collage, photocopies, and postcards that eluded the circuits of the art market as they initiated new, transnational networks. These practices were unprecedented in Venezuela, such that the critic Juan Calzadilla called Ogaz “a sort of martyr of the seventies…transgeneric but without an audience, an experimentalist in the lineage of Tzara and Picabia, but unsociable, solitary…” 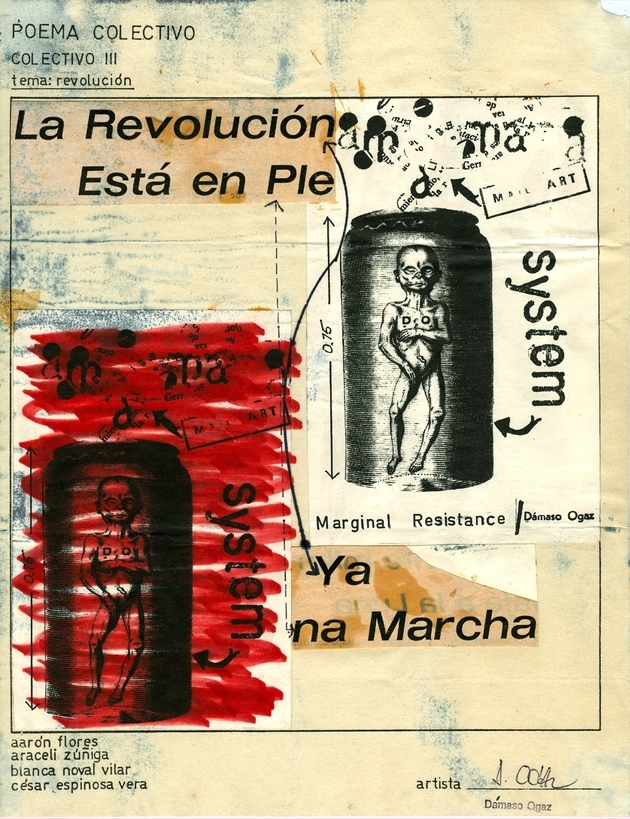 Ogaz’s participation in the Poema Colectivo project questions such an assessment, but he does stand alone among Venezuelans, native or adopted. Perhaps more so than any other artist affiliated with El Techo, Ogaz draws from the archaizing imagery and strategies of physical rupture characteristic of Dada and Surrealism. His work abounds with the collisions of fragmented bodies and textual dislocations: the titles of his mailed C(art)As break open the Spanish carta (letter) to insert the English art, polyglot hybrids of written and visual communication. Similarly, he edited a journal devoted to mail art, Cisoria Arte, which derived its name from a Spanglish neologism for “scissors” that also references the fifteenth-century treatise “Arte Cisoria” by Enrique de Villena.

That idea of cutting or slicing is thematized in Ogaz’s contribution to the Poema Colectivo. Invited to take up the topic of revolution, Ogaz cuts in half what appears to be a newspaper headline—“La Revolución Ya Está en Plena Marcha” (The Revolution is Already Underway)—and counterposes the two fragments with a duplicated diagram of a figure, perhaps a fetus, held within a container and labeled with the artist’s initials. Splitting and doubling, actions that destabilize the integrity of the art object itself, seem to be Ogaz’s proposals for “marginal resistance,” even if revolutions can be so easily cleaved. 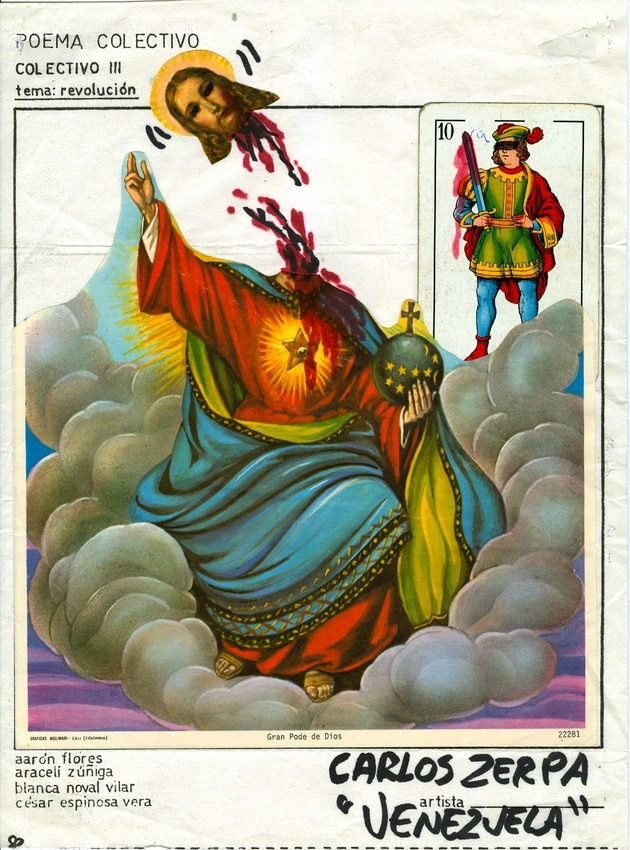 Zerpa, the younger of the two artists, also responded with a scenario that involves physical separation but more directly confronts the specter of Venezuelan (religious) tradition. Pairing a Catholic holy card with a secular analogue in the form of a popular playing card, Zerpa imagines the violent decapitation of Christ in heaven. The image is exemplary of his interest in humorous inversions of Catholic iconography, religious rituals, and popular kitsch, but like many of his compatriots Zerpa was primarily interested in performance as a mode of conceptualist critique. The same year he contributed to the Poema Colectivo, he took part in the now canonical festival Acciones frente a la plaza (Actions in Front of the Square) in Caracas, and he would subsequently work with the No grupo artists in Mexico.

Zerpa’s sacrilegious vision of a murdered Christ directly confronts, and seeks to defeat, the traditions and conventions that weigh so heavily upon Venezuelan culture. If El Techo sought to challenge the imbricated paradigms of kinetic art and developmentalist economic policy, Zerpa and other artists of the 1980s are part of the same conceptualist genealogy. Imbuing mail art and popular objects with sharp, anti-clerical satire, Zerpa suggests that the “Revolución” desired by the Poema Colectivo must constitute a sweeping away, a decapitation, of the dominant order. What exactly may replace that order is left undefined—the shattered text that Ogaz identifies as “mail art” suggests that, for the time being, perhaps the explosion of existing structures may be enough.

Included among the some three hundred fifty contributions to the Poema Colectivo: Revolución (Collective Poem: Revolution) are two works by Venezuelan artists, Dámaso Ogaz (1924–1990) and Carlos Zerpa (1950– ). Though members of different...