Curator, Painting and Sculpture The Museum of Modern Art Laura Hoptman has been a Curator of contemporary art in the Department of Painting and Sculpture at The Museum of Modern Art since 2010. Since joining the museum she has... Read more »
Show Less
Click here to visit the current discussion about this essay.
Keywords: Neo-Concretism, Perceptismo, Perceptism, Manifesto Invencionista, Art Concret, Asociación Arte Concreto-Invención, Latin America, Concreticism, C-MAP, MoMACisneros, Invention no. 150, Raúl LOZZA
Many Places in One: International Connections in MoMA’s Collection Raúl Lozza's Invention no. 150
Essays 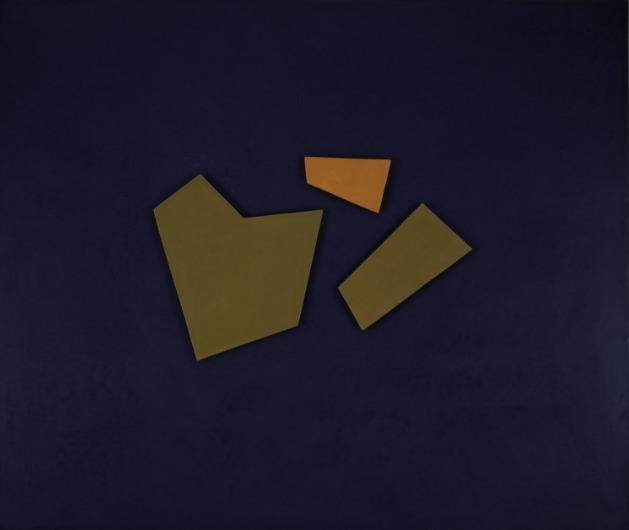 Raúl Lozza’s sixty-year painting career was dedicated to the exploration and radical development of the concept of Concretism as defined by European painters before and immediately after World War II. Lozza joined the Buenos Aires–based Asociación Arte Concreto-Invención (Concrete-Invention Art Association) in 1945. Inspired by Piet Mondrian, Theo van Doesburg, and the Swiss artist Max Bill, members of the Asociación advocated for their own brand of what van Doesburg called Art Concret, which he defined as a kind of art “constructed of purely plastic elements (lines, planes, surfaces, colors); devoid of references to nature, lyricism, symbolism, and the unconscious; and with no significance beyond itself.”1 The Asociación’s 1946 “Manifesto Invencionista [Inventionist Manifesto]” of which Lozza was a signatory, echoes van Doesburg’s call for a detachment from objects in nature, condemning “the illusion of representation” in favor of what the group calls the “scientific aesthetics of invention.”2

Lozza broke away from the Asociación two years later in order to create his own movement, which he called “Perceptismo,” or “Perceptism” in English. Consisting of but four people, two of whom were Lozza’s brothers, the group shared the Asociación’s Concretist point of view but expanded it beyond the confines of the canvas and stretcher. Its members advocated the complete rejection of the frame and the concomitant idea of a painting as a window. Instead, they favored what Lozza called “walls of color,” which were conceived of as actual walls painted in monochrome, upon which forms floated in relief. In practice, Lozza’s concept of a continuous wall of color was translated into paintings with smooth monochromic fields that traversed unbroken from one edge of the work’s surface to another, but the desire for pictorial elements—particularly color—to escape the confines of the canvas and colonize architectural space was prescient, presaging Neo-Concretism, the Brazilian-born movement that, more than a decade later, would bring color and shape into three-dimensional space.

Painted in 1946, Invention no. 150 is a primer on the tenets of Perceptism and indeed, an example of Concretism on the cusp of the Neo-Concretist revolution. Of a modest size, the work consists of a configuration of nonobjective forms that, as the title suggests, are wholly invented. They are biomorphic but do not allude to or symbolize anything in nature. They are what they are—nothing more, nothing less—and as such are non-metaphorical. Arranged in a centrifugal composition on a densely painted monochromatic field of color, the forms aren’t embedded in the flat, opaque background; hovering in relief in a plane just above the works’ surface, they are in association with but autonomous from their background. 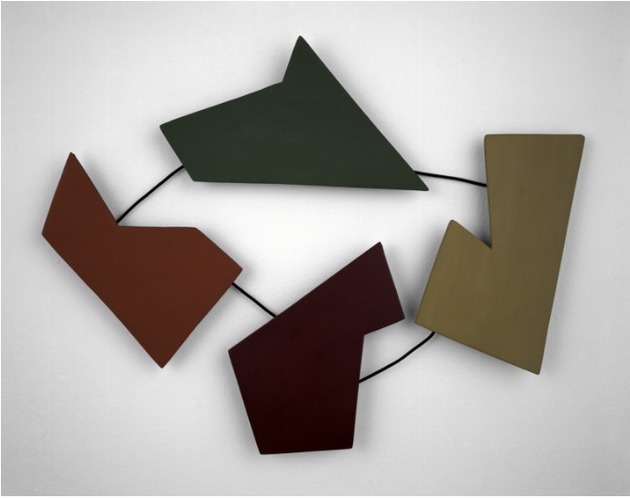 In Invention no. 150, traditional composition and palette choices are superseded by a non-hierarchical organization governed by sets of rules of the artist’s own devising. This is made clear by two diagrams on the back of the painting: one a drawing that maps the placement of each form, and the other, a painted key that plots color relationships. These diagrams reveal two predetermined plans, or “systems” that don’t describe as much as prescribe the creation of the work. Foreshadowing the Conceptual art that would flower more than twenty years later, they are sets of instructions that, taken together, translate Invention no. 150, into a kind of system, or in the words of Sol Lewitt, a “machine that makes the art.”3

Invention no. 150 is a precocious connector to at least two generations of artists experimenting with Concretism, Neo-Concretism, and Conceptual art. As a painting, it is a singular achievement but it is also a pivotal example of the development of a progressive form of Concretism in South America.

by Jerónimo Duarte Riascos
Read More »
This Essay is part of: Patricia Phelps de Cisneros Research Institute for the Study of Art from Latin America Many Places in One: International Connections in MoMA’s Collection

By Samantha Friedman
Discuss
ï Many Places in One: International Connections in MoMA’s Collection Raúl Lozza's Invention no. 150