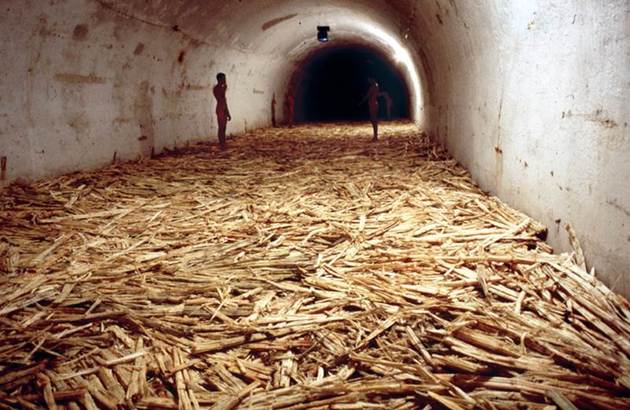 Untitled (Havana 2000) is a pivotal work in Tania Bruguera’s artistic career. Realized in response to an invitation to participate in the VII Bienal de La Habana in 2000, it consists of a large-scale video installation and performance. Inside a darkened tunnel, mashed sugarcane is piled up to several inches on the floor. The sweet-and-sour smell of fermenting sugarcane is pervasive. At the end of the long space, there is a shimmering light that originates from a small TV monitor, which hanging from the ceiling, displays a black-and-white video of Cuban dictator Fidel Castro. In it, the charismatic leader appears in different settings, both public and private, delivering speeches before thousands of followers, swimming at the beach, and opening up the shirt of his military uniform to show that he is not wearing a bulletproof vest—an image that recurs every other minute. As the viewer turns back to the entrance of the room, s/he realizes that four barefoot, naked men are standing on the mash, quietly rubbing their hands, like Lady Macbeth washing the blood from her hands in William Shakespeare’s classic play.

For the 2000 Havana Biennial, the organizers focused on the theme “Closer to One Another,” which dealt with communication in an increasingly globalized world at the turn of the millennium. At the time, Bruguera was interested in investigating power through her performances and installations. She sent several proposals addressing the issue of mis/communication with and of power. Organizers turned them down, alleging “problems of aesthetic quality,” a typical charge of the cultural officials employed to silence critical works in Cuba. Further, they assured Bruguera that there was no sugarcane mash available in a country that has been famous throughout the centuries for its sugar production. Thus, Bruguera decided to travel to Havana and to work in situ in her designated vault at the Cabaña Fortress. She arranged for the delivery of two truckloads of sugarcane mash. On the eve of the opening, one of the curators visited her to inquire about her plans. She described the installation and the performance that she intended to carry out within it. The curator was hostile, voicing her mistrust of Bruguera, whose work had been banned some years ago. However, she found nothing to worry about in the unfinished installation. The TV monitor and video player had not yet been installed.

The video showing Fidel Castro was not seen until opening day. Cuban artists have rarely shown images of Castro, except for laudatory ones, for fear of censorship. Bruguera incorporated images taken from various sources, most prominently a propagandistic documentary by American filmmaker Estela Bravo, a fixture in the Cuban media and known for her pro-Castro stance. In Bruguera’s edited video the performativity of power through mass media is in full display in the leitmotif of Castro’s opening up of his shirt. The contrast of this show of mortality and bravura with actual naked men gesturing, bowing to the image on the TV monitor, cleaning their bodies, and standing on a sea of mash in putrefaction was explosive.

Dozens lined up to enter Bruguera’s work. Only four to five viewers were allowed inside the darkened vault at one time, hence there was a long line to get in. Soon word spread of a strong work featuring Castro in a room with naked men. The organizers’ reaction was aggressive but sloppy. They shut down power to sabotage Bruguera’s work without realizing that this move would affect an entire section of the Cabaña Fortress, prompting several participating artists to protest. Also they removed the video and banned Bruguera from resuming the performance the following day. For the remainder of the Biennial, viewers saw only the sugarcane mash installation, and learned of the video and performance through oral accounts.

The Havana Biennial purportedly highlights Cuba as a center of the avant-garde among developing countries whose histories are mired in violence and conflict. Yet the show takes place in isolated tourist areas, where ordinary Cubans are rarely seen. Bruguera included the naked men as a way to remind viewers of the inhabitants of an island lacking basic freedoms, but also to bring back to life the ghosts of the place in question. The Cabaña Fortress played a significant role in the darkest days of Cuba’s political history. From colonial times to the early years of the Revolution, it was a hotspot for incarceration, torture, and assassination of leaders of the opposition. The infamous Ernesto “Ché” Guevara and current president Raúl Castro are said to have personally led firing squads there to extrajudicially execute large numbers of people accused of counterrevolutionary activities and spying for the CIA. By presenting men in positions of vulnerability within an atmosphere of rotten decay presided over by Cuba’s personification of power, Bruguera metaphorically revived the fortress-turned- art-gallery’s truculent past.

Untitled (Havana 2000) marks a turning point in Bruguera’s work in several aspects: For the first time, the artist removed herself from the performance. She hired neighbors and friends, including an actor. She chose male performers to avoid attracting the feminist critical assessments received by women artists in general, and her previous works dealing with power in particular. For the same reason, she used Castro’s image, a military man, as the paramount symbol of power in Cuba.

Also in this work Bruguera for the first time sought to control the number of people allowed to attend each performance. She was interested in subverting the crowd-pleasing logic that often prevails in international biennials such as Havana, where success is assessed in terms of attendance. Lastly, she attempted to undermine preconceived political imaginaries that viewers bring to the work by exposing them to more sensorial experiences, such as the shocking proximity of naked men in a darkened space. Rather than presenting a visual image that requires contemplation, Bruguera wanted to trigger different behaviors in the viewers. Eventually this approach evolved into a pedagogical project she called Cátedra Arte de Conducta (Behavior Art School).

The original title of Untitled (Havana 2000) was Untitled 2000, from the series "Engineer of Souls." It was partially intended as an homage to Cuban exile artist Felix Gonzalez-Torres, who customarily entitled his works Untitled in order to highlight the viewer’s role in the completion/construction of meaning. Gonzalez-Torres often added his own personal meaning as a parenthesis, sometimes inserting the place and year of a specific event. This was not the first time Bruguera paid homage to the work of Cuban exile artists. Beginning in 1986 she reenacted several performances by Ana Mendieta. She also included the work of numerous exile artists in the underground newspaper Memorias de la Postguerra II (Postwar Memory II; 1993–1994).

In spite of censorship, Untitled (Havana 2000) opened important doors for Bruguera, and cemented her international career. Curator Okwui Enwezor, who at the time was preparing Documenta 11, viewed it and invited Bruguera to realize a similar work for Kassel. This led to her reconceptualization of Untitled (Havana 2000) as a paradigmatic approach to responding to the memory and history of place. After Havana, she completed three major projects of this type, in Kassel, Moscow, and Bogota, and she is currently developing a fourth in the Israel-Palestine region.