“Scallops St. Tropez” was Raymond Loewy’s contribution to a book of celebrity recipes published in 1958. The book’s editor, Helen Dunn, introduced Loewy, as “perhaps the world's most renowned designer . . . . Mr. Loewy spends six months yearly in New York designing everything from airplanes to household appliances. The other six months he travels in France, Italy, Germany, England and the Scandinavian countries, developing creative ideas.” Dapper, energetic, and a self-professed gourmet with a keen eye for publicity, Loewy, born in Paris in 1893, brought a dash of French glamour to the world of industrial design in the United States, where he first landed in 1919. Initially employed as a window display designer and fashion illustrator, he established his own industrial design consultancy, Raymond Loewy Associates, in 1929. Within two decades he had become a household name, the first in his profession to be featured on the cover of Time magazine. “He streamlines the sales curves,” purred the editors in the issue dated October 31, 1949. 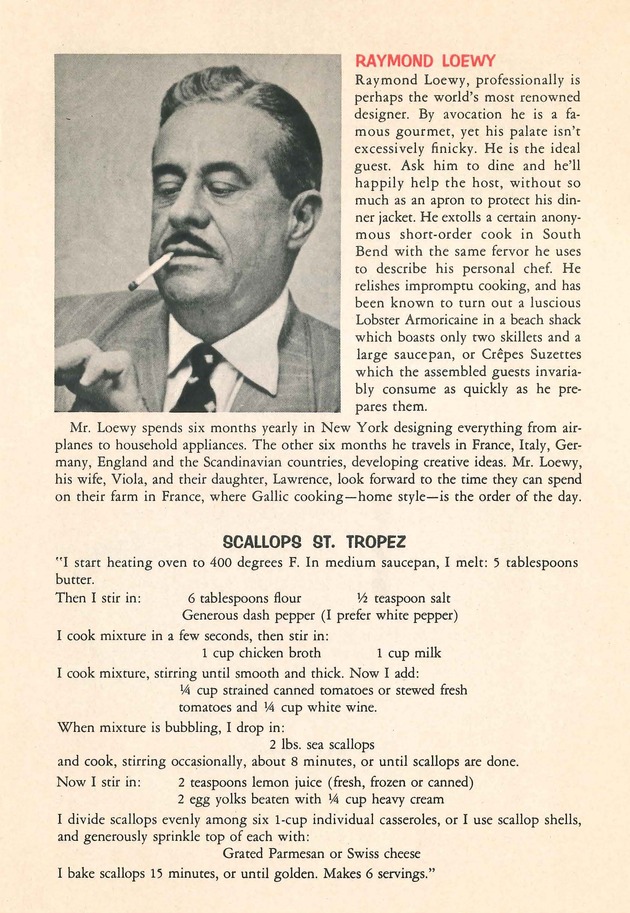 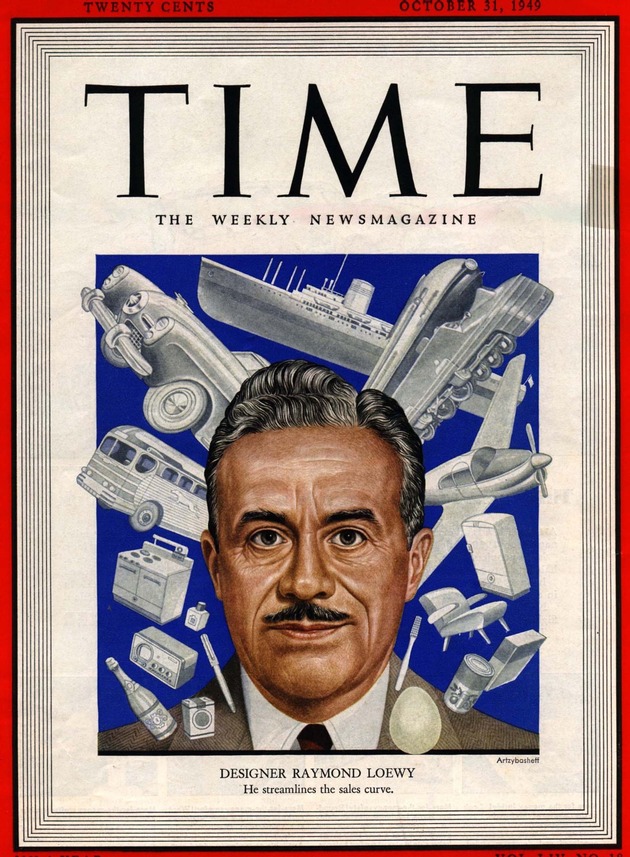 Raymond Loewy was featured on the cover of Time magazine in October 1949 next to the caption: “Designer Raymond Loewy: He streamlines the sales curve”. Oct. 31, 1949

Raymond Loewy on the cover of Time magazine, October 31, 1949. It reads: “Designer Raymond Loewy: He streamlines the sales curve."

Loewy’s firm was responsible for a steady stream of U.S. design icons: the Coldspot refrigerator (1934), Lucky Strike cigarettes packaging (1939), Greyhound buses, Studebaker cars, Coca-Cola dispensers, sewing machines, Rosenthal dinnerware, and corporate graphics for Exxon, Shell, and the US Postal Service. This range testified to the potential impact of industrial design on the daily lives of millions, and to its power as a commercial tool. Loewy understood how package design and branding could contribute to the success of a product, an organization or a company. One of his most potent designs was for JFK's Air Force One, which entered service in the fall of 1962. Loewy's modern and elegant design of the plane’s livery (the external graphics and color scheme) transformed this particular Boeing 707 into an important element of the Kennedy administration’s global brand. In interviews, Loewy emphasized his connection with this brand by recalling his one-on-one consultation with the President at the White House. 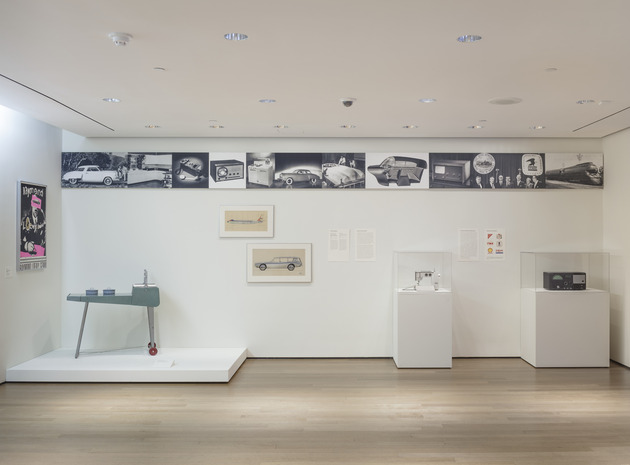 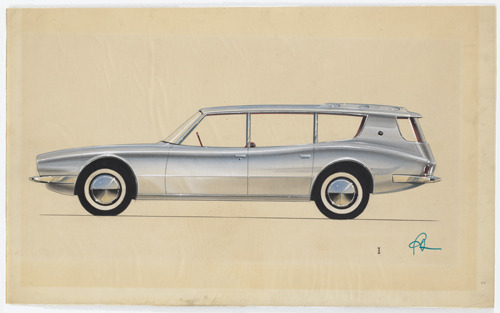 Another commission that took Loewy to the heart of the North American establishment was his appointment as a consultant to the National Aeronautics and Space Administration. During his association with NASA, from 1967 to 1973, his firm produced over 3,000 designs for space-related products.1 It comes as a surprise, then, to learn that Loewy, so closely identified with state-sponsored design and the material culture of postwar America, appears simultaneously to have occupied a unique position in the industrial design of the Soviet Union. At the height of the Cold War, he was not only one of the very few American designers to make repeat visits to the USSR, but also collaborated with designers and factories there at the request of the Soviet state. (One can’t help wondering how his gourmet tastes fared during this exchange!) 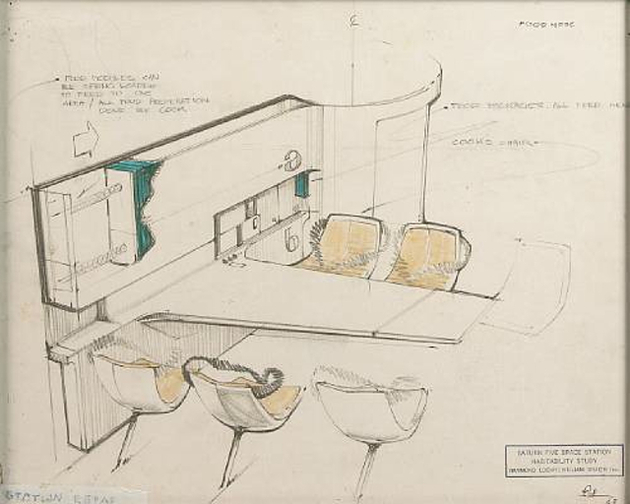 In the decade after the much-publicized “Kitchen Debate,” the ideological confrontation between US Vice President Richard Nixon and the Soviet Premier Nikita Khrushchev in front of a General Electric kitchen at the 1959 American National Exhibition in Moscow, rivalry between the two superpowers in the field of industrial design gained momentum. Materially and theoretically, design was central to the Cold War competition. Recent scholarship has highlighted the importance of that era’s international design exhibitions and trade fairs, through which the United States Information Agency channeled a form of “soft power.”2 Specifics of the Soviet side of the story are less well researched, in particular the role of the state-controlled All-Union Research Institute of Technical Aesthetics (VNIITE). New information on this topic is emerging, however, thanks to the efforts of Alexandra Sankova, director of the Moscow Design Museum, and her Russian colleagues, who have been conducting oral history interviews and salvaging design archives relevant to this period. Ms. Sankova has helped C-MAP document a fascinating and little-known episode in Loewy’s career, presented in the account that follows.

In 1962, the year that Loewy’s Air Force One went into service, Yuri Soloviev (1920–2013) was appointed director of VNIITE and charged with expanding design activity in the USSR. Soloviev developed the Moscow-based institute as an umbrella organization with 10 branches and 400 design bureaus linked to various nationalized industries. The goal of VNIITE was to improve the quality and user-friendliness of manufactured goods, replacing unattractive, low-quality products with well-made, appealing ones. The institute organized Soviet design exhibitions around the world as well as international design exhibitions in the USSR. In addition, Soloviev established two centers of “technical aesthetics” (the term for “design” used in the Soviet Union until the 1980s). These centers began to develop new educational programs and quality assurance schemes on an unprecedented scale. However, many design projects initiated by VNIITE never went into mass production; instead, they ended in prototypes relegated to storage or displayed in factory directors’ offices. Visitors were invariably told that these distinguished products would be manufactured in the near future; the common response to questions about why these goods were not already in production was that the designers did not understand the technological processes involved. This overly simplistic explanation appears to have satisfied many in positions of authority, but disguised the more complex problems of facilitating such design innovation within a centralized, state-run system.

Soloviev sought to galvanize Soviet industrial production by developing international relations, and in 1969 he pushed for VNIITE to become a member of the International Council of Societies of Industrial Design (ICSID). As vice president of ICSID from 1969 to 1973, he encountered Loewy on several occasions and later remembered him as extremely interesting and energetic, and as someone who paid close attention to his appearance. The fascination was mutual. Loewy invited Soloviev to visit the US to learn more about American design and designers. Somewhat unusually, Soloviev’s trip was approved by the Soviet Committee on Science and Technology without delay. In return, Loewy was commissioned to design 10 products tailored to the technical capabilities of Soviet factories. His international reputation and experience of running an independent design studio with access to high-level technological innovations and companies in the US, France, Britain, and Switzerland made him an attractive choice, as did the scope of his practice, which ranged from popular industrial products, company logos, and identity design to automobiles, airplanes, and space stations.

The cost of Loewy’s work was very high compared with that of his Soviet colleagues. Nevertheless, a preliminary agreement was signed in Paris in 1971 by Loewy and Dzhermen (Jermen) Gvishiane (vice-president of the USSR Committee on Science and Technology). The Soviet Ministry of Foreign Trade then chose 10 products for Loewy to design for the foreign market, including the Moskvich car, interiors for TU airplanes, and Zenit cameras. The connection with Zenit, a company involved in the manufacture of military hardware, is most surprising, given Loewy’s concurrent work with NASA. 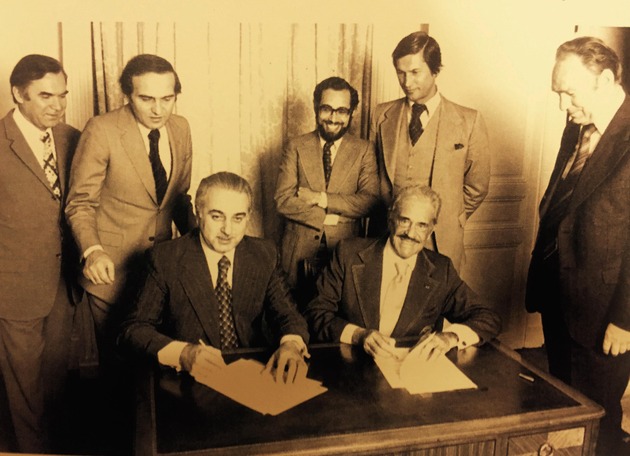 Agreement being signed in Paris by Dgermen Gvishiane, vice-president of the Soviet Union’s Committee on Science and Technology, and Loewy (seated right). Photo courtesy of Moscow Design Museum 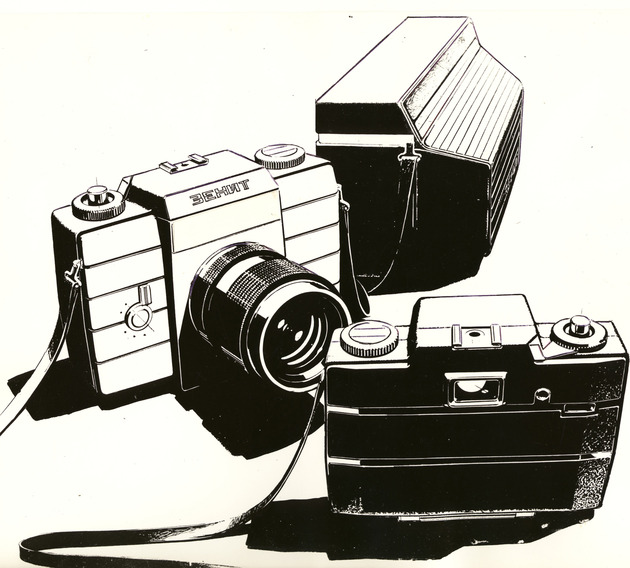 Within a few months, Loewy duly presented the concepts and prototypes he had developed in consultation with the participating factories. A witty raconteur and effective communicator, he apparently charmed his Soviet colleagues by talking humorously about his career and expounding in unfamiliar ways on the differences between socialist and capitalist design. In a culture with little room for independent judgment and a desire for Western-made goods, exposure to Loewy’s ways of talking and thinking was significant.

The designs were approved and paid for, yet the majority ended up alongside other VNIITE prototypes as displays in factory directors’ offices. Only one of them, the three-chambered refrigerator ZIL, was put into production—three years later and with significant changes. Loewy’s designs for the Soviet factories were extremely close to others he had produced successfully in the US, where there was close collaboration between designers, manufacturers, market researchers, and distributors at every stage in the realization of the end product. However, VNIITE’s design concepts and prototypes were developed in a vacuum and ultimately foundered amid the web of bureaucratic procedures. This episode demonstrated that employing a celebrity designer attuned to Western markets was not a magic bullet for modernizing centrally planned industries. Nevertheless, Loewy’s Soviet adventure advanced Soloviev’s work at VNIITE by introducing a new language of design and an appreciation of user-friendly approaches, even as it underlined the extent to which Soviet industry was falling behind in the global marketplace. His involvement paved the way for Soloviev to host the ICSID Congress in Moscow in 1975 and to develop Interdesign, a series of projects conducted worldwide with individual design teams composed of industrial designers, architects, and artists of different nationalities, political leanings, and cultural backgrounds. With respect to industrial design, at least, the Iron Curtain was more permeable than the political rhetoric of both the US and USSR would have us believe.

More information can be found on NASA's website here

Latest discussion on:
Cold War Modern: Raymond Loewy in the US and the USSR

This Essay is part of: Transnational Histories and Non-aligned Networks Many Places in One: International Connections in MoMA’s Collection

Toward a Museum of Incommensurables

The History That Did Not Come to Pass: Naeem Mohaiemen in Conversation with Sarah Lookofsky

By Nikolas Drosos
Discuss
ï Many Places in One: International Connections in MoMA’s Collection Cold War Modern: Raymond Loewy in the US and the USSR